Hence, we are pleased to welcome as our guest blogger Erika M. Martínez,
editor of an exciting and courageous new literary anthology by 25 Dominican women.
The book will be released on April 15. Watch for it! 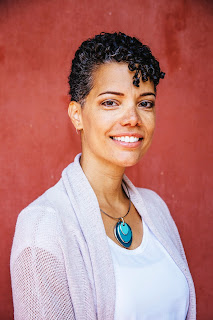 Announcing the call for submissions for Daring to Write: Contemporary Narratives by Dominican Women in environments full of machismo was quite the challenge. When I attended literary events in the Dominican Republic men offered to contribute to the anthology, yet their writing often objectified women, depicting them as helpless victims or as possessing only sexual power. “This is going to be an important work. It should include men,” someone said to me once. Men assumed they could speak for women, but it wasn’t enough to have female characters in a story. I had to defend my decision to concentrate my work on women writers.

At the 2009 International Book Fair in Santo Domingo, I gave a presentation to young students and pointed out that the reasons for my work were everywhere. Women in the country earn less than their male counterparts and face double the unemployment rates. In an hour-long presentation, I couldn’t go into all of the reasons for the inequities or share the anecdotes I’d heard from the many women writers who struggled to carve out space and time for writing with the multiples roles they play in the household. Instead, I had the young audience look at the photographs covering the walls from floor to ceiling; we were in the pavilion for Dominican authors. It didn’t take the students long to realize they were mostly surrounded by portraits of men. I explained that there were many more Dominican women writing then those who were featured in the pavilion. I didn’t know what the criteria had been for the selection of portraits, but it couldn’t have been publication because I knew of several female writers with published books whose photographs were not displayed.

I also told the students about one of the classes I was auditing at the university, “Autores Dominicanos,” that the male professor teaching assigned forty-eight authors and only four of them were women. This was not because there was a lack of women authors. The list could have been divided in half between male and female.

I chose to focus on women because after my parents’ divorce, I was raised by my mother and other strong single women in my family who struggled to make ends meet working in factories. Throughout my life I’d longed to see in books the stories I’d heard as I cooked, sewed and cleaned alongside my mother, cousins and friends without a male presence. A counter-narrative to the ways in which women are portrayed in men’s writings was what I needed. I was interested in exploring what it means to be a Dominican woman in the United States as well as on the island.

The anthologies of Latino writers I’d read on my own focused on authors of Mexican-American, Cuban-American and Puerto Rican-American descent, yet the Dominican-American population was growing exponentially, becoming the fourth largest Latino community in the United States. I could not have been the only one wanting to see our lives reflected in literature.

Common threads appeared throughout the short stories and personal essays submitted. The contributors of Daring to Write delved into how machismo, men’s infidelities and domestic violence shaped the perceptions and development of young women. We can now hear from the voices of those who are being objectified speaking as full subjects of their own lives. Together, the writers in this anthology are reshaping the image of Dominican women and making them visible.#

ABOUT THE AUTHOR:  Erika M. Martínez works with the National Writing Project in New Hampshire and is a staff member of their Invitational Summer Writing Institute. She has contributed to various anthologies, including Wise Latinas: Writers on Higher Education and Homelands: Women’s Journeys across Race, Place, and Time. She lives in Oakland, California.  To learn more about Erika and DARING TO WRITE, click here.
BOOK SUMMARY:

With this new Latino literary collection Erika M. Martínez has brought together twenty-five engaging narratives written by Dominican women and women of Dominican descent living in the United States. The first volume of its kind, DARING TO WRITE offers readers a wide array of works on a range of topics, including love and family, identity and belonging, immigration and the meaning of home. The resonant voices in this compilation reveal experiences that have been largely invisible until now.

The volume opens with a foreword by Julia Alvarez and includes short stories, novel excerpts, memoirs, and personal essays and features work by established writers such as Angie Cruz and Nelly Rosario, alongside works by emerging writers. Narratives originally written in Spanish appear in English for the first time, translated by Achy Obejas. An important contribution to Latino/a studies, these writings will introduce readers to a new collection of rich literature.