15 BOOKS FOR THIS SUMMER & FALL

May 30, 2016
Book Expo America earlier this month was a fun and maddening adventure into the world of books.  It was great to meet authors, editors, illustrators and other industry professionals.  Not all booths were as diverse as they should have been, but all were sources of information, especially on upcoming books.

Below are 15 books that were getting good buzz at BEA.  Some you can read now, others you’ll have to mark your calendars for their upcoming release.  Happy Summer, Happy Reading! --Maria 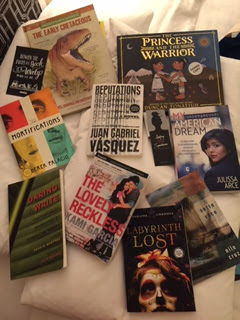 15 BOOKS FOR THIS SUMMER & FALL

ANCIENT EARTH JOURNAL: THE EARLY CRETACEOUS by Juan Carlos Alonso & Gregory S. Paul (science) – Walter Foster Jr.
--Outstanding class room text books and great coffee art book!
--Great descriptive narrative and detailed illustrations will entrance kids of all ages.  Plus, this book is “backed by the research of one of paleontology's most acclaimed theorists, giving the book the most up to date scientific interpretation regarding animal behaviors, interactions, and recreations.”

FRIDA KAHLO AND THE BRAVEST GIRL IN THE WORLD by Laurence Anholt– Barron’s
--Part of Anholt’s Artists Books for Children series.  Will debut in September.
--SUMMARY:  A delightful and charming book, and a lovely addition to the highly-acclaimed Anholt's Artists Books for Children series. This time a little girl named Mariana is sent to have her portrait painted by Frida Kahlo. Mariana is scared but is soon at ease as Frida introduces her to her pets, from a handsome parrot and funny spider monkey to a little dog, baby deer, and beautiful eagle. Mariana also learns more about Frida’s life, as the reader does as well. The book contains numerous illustrations by Anholt, including several reproductions of Frida’s famous paintings.  This will be a hit with children of all ages.

HECHICERA:  A COLORING BOOK FOR CHINGONAS EVERYWHERE by Rosanna Alvarez   (art) – CreateSpace
--Coloring books for adults are all the rage.  I own a few myself.  Here is a collection of coloring pages created as an offering toward reclaiming the collective power of women. “45 designs that include a mix of patterns and words that are bold, raw, endearing, empowering, strong, and sometimes painful, harsh, and uncomfortable. Presented together, they serve as an invitation toward healing and self-care. Rosanna Alvarez’s intricate designs invite you to tap in to your creative side and personal power as you color each page. This is her second coloring book publication, following the debut of Dreams, Serendipity and Wisdom: A Coloring Book Meditation suitable for colorists of all ages.”

LABYRINTH LOST by Zoraida Cordova (paranormal) – Sourcebooks
--Book 1 in the Brooklyn Brujas series; debuts in September
--A magical tale with a hero’s quest. Our heroine is a bruja who wishes her power away only to make her family disappear instead. Now she must immerse herself in the magic she loathes to save the family she loves. 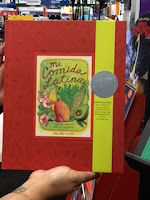 MI COMIDA LATINA by Marcella Kriebel (cookbook) -- Burgess Lea Press
--Called “stunning.”  It’s a superb collection of culinary traditions from Puerto Rico to Mexico to Peru to Ecuador to Colombia.  There are over 100 authentic recipes from arepas to tamales to salsas to flan to paletas. The recipes are hand-lettered and surrounded by beautiful watercolors by the artist.

MORTIFICATIONS by Derek Palacio (fiction) -- Tim Duggan Books
--This is Palacio’s debut novel; coming out this October.
--Set during the Mariel Boatlift in 1980, the Encarnacion family is torn apart as the father stays on the island while the mother and children seek shelter in America.  But these Cuban immigrants don’t stop in Miami, instead they settle in Connecticut, a very different land than what they left behind. A heart wrenching tale of separation, hope and the power of love.

MY (UNDERGROUND) AMERICAN DREAM by Julissa Arce (memoir) – Center Street
--Debuts in September
--A daring tale of one woman’s dream and her determination to not only survive being an undocumented immigrant but the courage to strive and become a leading Wall Street executive. Her parents left Mexico for America to give her a chance at a better life.  The Texas Dream Act makes college possible for Julissa, and an internship at Goldman Sachs leads to a position and life many dream of having. Julissa is on top of the world, except for the fear that it will all crash down around her because of her undocumented status.
--This is the story of undocumented immigrants that needs to be told and retold. This is the American Dream made possible. A courageous tale for all readers! 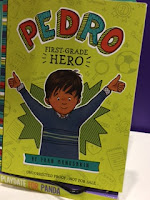 REPUTATIONS by Juan Gabriel Vasquez (fiction) – Riverhead Books
--New novel out in September
--Haunting, masterful novel set in Colombia’s tragic past. A cartoonist becomes a living legend with tremendous power at the tip of his pen, until a mysterious visit from a young woman turns his world upside down.

SOFIA MARTINEZ:  MY FAMILY ADVENTURE by Jacqueline Jules (children) – Picture Window Books
--Wonderful, enchanting series about a precocious young girl who is always up for an adventure.

SOTTO VOCE by Nilo Cruz (play)-- Theatre Communications Group
-- Nilo Cruz is the author of the Pulitzer Prize–winning Anna in the Tropics,
-- This is a play and a mystery. A young Jewish-Cuban researcher coaxs an 80-year old German-born writer to remember the past, especially the truth of what happened to her long-lost lover, Ariel Strauss, who set sail in 1939 aboard the St. Louis never to be seen again.  “Sotto Voce is an imaginative exploration of the power of memory, love and human connection.” 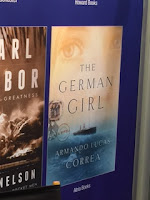 THE GERMAN GIRL by Armando Lucas Correa (fiction) – Atria Books
--Editor in Chief of People En Español pens first novel; debuts in November in both English & Spanish editions
--Ambitious debut tells the story of two 12-yearl old girls.  The first, Hannah, flees war-torn Germany on the St. Louis towards what should be a Cuban haven.  Seven decades later, Hannah reaches out to her great-grand niece, Anna Rosen, on her 12th birthday to connect their family histories.

THE LOVELY RECKLESS  by Kami Garcia (Young Adult) –  Imprint
--Coming out in October, this is Kami Garcia’s new YA novel full of drama, romance and suspence.  Has been called:  The Fast and The Furious meets Romeo and Juliet.  How can we not read it with those two recommendations?!

THE PRINCESS AND THE WARRIOR by Duncan Tonatiuh (children) –Abrams Books for Young Readers
--Duncan is a truly gifted artist.  His illustrations are works of art. Here he brings a beloved Mexican legend to live.
--Summary: Princess Izta had many wealthy suitors but dismissed them all. When a mere warrior, Popoca, promised to be true to her and stay always by her side, Izta fell in love. The emperor promised Popoca if he could defeat their enemy Jaguar Claw, then Popoca and Izta could wed. When Popoca was near to defeating Jaguar Claw, his opponent sent a messenger to Izta saying Popoca was dead. Izta fell into a deep sleep and, upon his return, even Popoca could not wake her. As promised Popoca stayed by her side. So two volcanoes were formed: Iztaccíhuatl, who continues to sleep, and Popocatépetl, who spews ash and smoke, trying to wake his love.###