The Latina Book Club congratulates actress-writer-comedian Jonisha Rios, whose book, CURSE OF THE BLUE VAGINA AND OTHER STORIES, was just released. Jonisha  shares with us a funny story of a Mom at a supermarket short on funds who ends us with more than she bargain for.  Welcome! 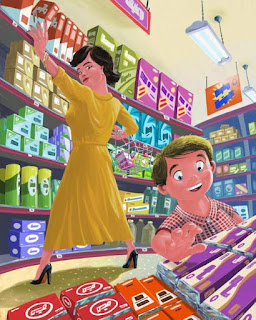 I’m in line at Winn Dixie here in Orlando, in one hand is a box of no frills pull-up pampers, in the other a basket with a half gallon of milk, cereal for the baby, an iced tea- and my guilty pleasure - an “US weekly magazine”.  I’m a sucker for those mags, especially when my life sucks.  I just look at the photos of the rich and famous and realize we aren’t all that different.  They’re just as screwed up as poor people are.

As I inch up to the cash register, I’m suddenly filled with dread “Will I have enough? Did my husband remember to refill the prepaid card? I look over at my child who has decided he wants a toy.  As I whisper, “No, Bobby, Mommy doesn’t have enough” he gives me a look: “If you don’t buy that iced tea and magazine, I can have this hot wheels car...”

Never mind the fact that he has at least 100 different matchbox cars all in different colors that his grandma and countless other relatives gave him.  I reach into my pocket and pull out a five, I never put stuff on that card unless its 100% for him, so the $5 is for my iced tea and magazine. But then again, I may have to vote on only one item in the whole basket if this card doesn’t go through. Two people are ahead of me. I look over at my son who has found a quiet spot on the floor to play with the car that he has somehow already removed from the packaging.

I love my son, but lately I’ve been feeling really lonely.  I just got out of an emotionally draining, and some would even say abusive, relationship.  It was a strange kind of abuse in that he didn’t beat me or even sling nasty words my way - it was more of him constantly rejecting me, being utterly unaffectionate, and then being loving, attentive, and kind to everyone else he met. He did this right in front of me and it was very hurtful.

I once asked if he could give me just an hour of his time per week so we could sit down and discuss parenting issues that came up and he said, “I don’t have an hour.” And then, within minutes, started texting back and forth with some girl he made plans with “for work.” The time spent on that exchange alone was more than an hour.

Eventually we began to live as roommates...  He started to come home late, really late.  When I questioned him about his whereabouts, I’d get sneers and dirty looks. What was it that changed?  Was it because I became a mom and quit my job to be with my son instead of paying some stranger to care for him? He eventually walked out on me blaming it on all my questions.

As I was scrolling through old texts of the phone he left behind, there was an exchange between my husband and a gal pal of his, who I actually finally met after years of them having a deep friendship I was never aware of. Anyway in this particular back-and-forth, they made fun of me and chuckled over how curt and nonresponsive he purposely made his texts. Naturally, when he didn’t pick up the phone I’d resort to sending him a text block about our son.  Listen, what you do is apparently your business, but when I need to know you’ll be there to watch our son, that it something where a little clarity beyond a “k” is appreciated.

Right before he finally left, I noticed he’d take off his wedding ring. It was then that I could feel myself sinking into despair. He blamed me, saying he wasn’t happy. But here is what he wasn’t happy about: BEING A RESPONSIBLE ADULT. It was too much for him - and to be fair, it’s tough for most of us.

My grandma always told me never to end up with a typical Latino man, because they almost always leave.  I argued, saying, “That’s BS Abuelita, my Dad who is your son didn’t, so I’m not buying into it.” Well, unfortunately, in my case she was right.

So, I'm officially that single Latina mom. And the worst part is, I’m broke.  Broker than ever before.  I get some child support, but it’s barely enough.  Although I do have a part-time job cleaning homes on my apartment floor, it’s not enough that will afford me the opportunity to move out of this ghetto apartment complex.  My apartment building is so ghetto that if you look it up online you’ll see it has more sex offender dots than the state of California has black smog particles.

It’s now my turn to pay for the groceries that have been bagged when, BEEP BEEP BEEP… “I’m sorry this card isn’t going through do you have another one?”

I’d run out of the store, but can’t leave my kid behind. I scan the line and see that what was just one person behind me is now 10. Some are rolling their eyes. All I keep thinking is maybe I don’t need these pull ups, but then if Bobby wets the bed that means quarters for laundry.

I pretend to search my wallet for another credit card.

As I’m searching my purse, my kid runs up to me with another toy car that is way overpriced.

“No, honey, I can’t get that right now please.”

A woman 3 people down the line mumbles under her breath. “Just put it all back already, I gotta go.”

I smile at the cashier and shrug. Bobby starts to cry and plead with me.

“Happens all the time, no need to worry. I’ll put this stuff back…” she says in a reassuring tone.

As I attempt to scoop my screaming child into my arms, I feel this tap on my shoulder.  When I turn around I see this man standing behind me. Not just any stranger, a hot stranger in a suit, 6’10,” fit, with sparkling green eyes, and a smile that made me blush. From his wallet he pulls out a crisp 100 dollar bill. My smile quickly fades. I don’t want to be seen as a charity case.  I have some left over rice and beans I can cook at home.

“She’s with me,” he says to the cashier with a wink.

Crazy embarrassed, I gently pull his hand away; I wanted to hug him, but I also didn’t want anyone to “save” me.  It all just made me feel even more worthless. Finally, I got the words to speak.

“And milk, and food? What about that magazine.  I think you really need it.”

I laugh. The people in line begin to grow impatient.

“No really, it’s fine. I get paid tomorrow, it’s really no big deal…” I say sounding confident as shit.

“Just stop. I can see in your eyes that you’re hurting. Just let me get these for you. To cheer you up.”

God, was it that obvious I was suffering? Ugh!

“My dad left when I was 2.  These years are the make it or break it years.  He couldn’t handle the emotions or the responsibility right?  Neither could my dad.”

I agreed to let “David” pay. Not because I wanted him to, but because I just wanted these other people behind me out of the store.

What started as an embarrassing low morphed into something pleasurable. David was funny as hell. An investment banker, who had a passion for music and an obvious soft spot. When he walked me to my beat up Honda civic, I turned and thanked him.  I insisted on giving him a check and made him promise to cash it when I told him to. I said even if he chose not to, I begged him to please pay it forward.

His random act of kindness gave me some hope.  True, we just met. Thing is, some people you meet feel like strangers, but others you have an immediate connection with. He showed me the type of care and compassion in a conversation that made feel heard.  But, I missed my husband and was deeply saddened that he was no longer around for me.

David reached into his pocket and pulled out a business card embossed with shiny gold lettering.

“If you need anything, food, magazines, a friend...”

And with that he drove off in his black BMW.

I put the keys in the ignition.  As I started to reverse, I suddenly slammed on my brakes because right behind me was a car.  I hear a knock at my window.  I turn, roll it down, and there he is… David.

“I’ll be in town this week - wanna go out sometime?”

And just like that, I was ready to date and see if life would bring me a taste of something different, if only for an evening… ###

BEST PROMOTIONAL QUOTE ON CURSE OF THE BLUE VAGINA: 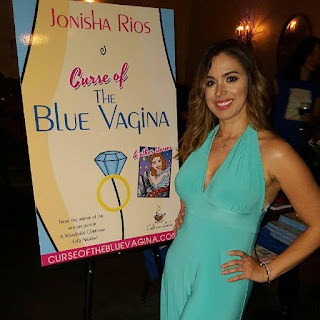 BOOK SUMMARY:  In the CURSE OF THE BLUE VAGINA AND OTHER STORIES, critically acclaimed Latina actress-writer-comedian Jonisha Rios, adapts her favortie plays into two fun novellas and a collection of monologues inspired by live interviews and conversations with women from all walks of life. The comedic collection of stories kicks off with the story of Cassandra Martinez. Just hours away from getting married she discovers she's cursed with a scary ailment that strikes good Latina women everywhere and keeps them from attracting the true love they deserve. She sets out to break the spell once and for all. In Nude in New York, Jonisha shares her own personal inspirational tale about her favorite aunt who teachers her a secret about the importance of a few cups of coffee. Overall this fun collection meant to make you laugh, feel inspired and walk away feeling appreciation for our precious, often funny lives.

ABOUT THE AUTHOR: Jonisha Rios is a graduate of American Musical and Dramatic Academy and the University of Connecticut. She is an award-winning actress and the writer and solo performer of the critically acclaimed one-woman-show Nude in New York.  In November of 2007, Lions Gate released her first written feature film A Wonderful Christmas: Feliz Navidad. Jonisha is in pre-production for both her comedy DVD’s Blame it on Rios and The Curse of the Blue Panties and she will be starring in a pilot set to shoot this year for a major TV network. Jonisha produced the award-winning short film Racket, co-wrote, and produced the award- winning short film Sweet Tooth. She also wrote and starred in the award-winning short film Saved by the Pole. Jonisha’s passion is to create great projects for children and adults. Learn more about Jonisha and her book at: www.CurseoftheBlueVagina.com