“He was using me as bait. And I was nobody’s bait. My mother had not crossed the Straits of Florida with a baby in her arms for me to become bait on dry land. I, Giselle Santos, was going to solve this mystery on my own.”—Gigi 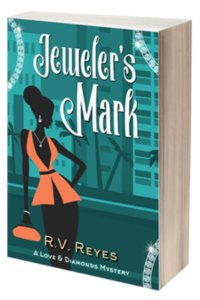 Giselle “Gigi” Santos is a sassy modern Latina working to make her family diamond company on par with Winston and Cartier.  She is also dateless for her 10th year high school reunion.  Enter sexy and brooding Detective Carlos Garcia; just what the doctor ordered, or was he?

Carlos in investigating a recent theft at Gigi’s jewelry store, but why does she feel like a suspect? Suddenly her whole week goes to pieces.

Monday: Carlos entered her life and made her point her loupe in his direction.

Tuesday: Gigi and her outspoken BFF Lou get into a tiff with Rosario “La Fea”, their high school nemesis and head of the reunion committee. That night Rosario is murdered.

Wednesday: Gigi and Lou are suspects. And worse yet, she learns someone is producing counterfeit copies of her best diamond rings.

Thursday: Gigi is so nervous she almost burns Carlos thinking he is a prowler.

Friday: She is attacked, and she still doesn’t have a date for the reunion!

Life gets more complicated and scary from there on, like something out of The Sopranos, but Russian.  And Carlos drives her crazy. He makes her feel everything from anger to lust to safety and back again. But Gigi is not a damsel in distress in need of rescuing….much. She decides to conduct her own investigation into the counterfeiters with Lou’s help – the deadly duo from La Caridad! – but it’s not fun when her brother is threatened and Lou is kidnapped. Suddenly, Gigi finds that she might need Carlos’ help after all.# 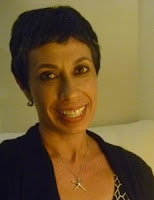 ABOUT THE AUTHOR:  R.V. Reyes is the third generation to work in her family’s jewelry business. Before continuing the family legacy, she studied theatre at the University of New Mexico, worked in nonprofit, learned photography in Puerto Rico, and lived the poet’s life. She resides in Miami with a revolving cast of foster kittens, a delightfully snarky teenager, and an ever-patient husband. Connect with her at: