BOOK OF THE MONTH: THE WOMEN OF LA RAZA: AN EPIC HISTORY OF CHICANA-MEXICAN AMERICAN PEOPLES BY ENRIQUETA L. VASQUEZ

Women are coming into their own, slowly but surely.  In fact, we almost had our first Female President of the United States. That glass ceiling may not be shattered yet, but one day. Until then, women will continue to fight for their rights and their place in history, like the women in this month’s Book of the Month by Enriqueta L. Vasquez.  Happy Reading!

THE WOMEN OF LA RAZA
An Epic History of Chicana-Mexican American Peoples
by Enriqueta L. Vasquez

In the beginning there was woman.


The Women of La Raza is a “Plain talk” woman’s perspective of history with a special value for both the spoken and written word. I use plain talk because there is a certain respect for plain talk, in the old tradition. In ceremonial circles one asks for, “la Palabra,” to speak. I have been humbled many times by the Indigenous peoples of Mexico where ‘la palabra,’ oratory, is highly valued.—Enriqueta L. Vasquez 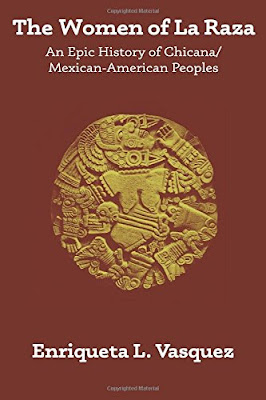 HERstory!  From goddesses to queens to rulers to heroines of independence to the 21st century Xhicana, THE WOMEN OF LA RAZA is an astonishing collection of Mexican and Mexican-American women.  Author, artist and activist Enriqueta L. Vasquez has put together a remarkable, ambitious and informative history of these women through the ages, and it’s one that readers will not forget.  We really hope this book makes it into history and women’s history curriculums.

BOOK SUMMARY:  The history of Mexican Americans spans over more than five centuries and varies from region to region across the United States.  Yet most of our books devote at most a couple pages on Chicano history, and much less attention is given to herstory of Chicanas.
Thewomen of La Raza offers a powerful antidote to this omission with a vivid account of the struggle and survival of our people and woman’s place in the history, who, despite discrimination in schools, jobs, and housing has contributed considerably to the development of this country.  The book ranges from female centered stories of pre-Columbian Mexico to profiles of contemporary social justice activists, labor leaders, organizers as well as today’s leaders and activists.
There is much to be learned from the women who fought and died in the War of Independence from Spain and the Mexican Revolution.  These women fought and died with their young children at their side and in the invasion from The United States of America.  This thoroughly enriching view of Chicana women’s history promises to become a classic.#

ABOUT THE AUTHOR:  Enriqueta L. Vasquez, born and raised in Cheraw, Colorado of Mexican-Tarascan parentage, is an artist, activist and writer co-authored “Viva La Raza!” (Doubleday, 1974) with Elizabeth Sutherland Martinez for which they received the Jane Addams Children’s Book Award. She was on the editorial staff of the Chicano newspaper “El Grito del Norte,” based in Española, New Mexico.  Her regular columns in El Grito as well as some of her poetry became well known and were used in many books and publications as well as conferences and women’s studies.  Enriqueta’s writings from El Grito were published in 2007 in an award winning book “Enriqueta Vasquez and the Chicano Movement” in the Hispanic Civil Rights series by Arte Publico Press, Houston, Texas. Along with her well known writings, Enriqueta designed and painted on several murals. She worked at the Centro Campesino in 1981 where she published a leaflet newspaper and produced a slide show film named “De Sol A Sol.” The film was used for educational and organizing purposes. Enriqueta is widely traveled, having been to Cuba, China, Spain, Germany, many parts of the southwest, as well as Mexico where she did much of the research for The Women of La Raza.  She is presently working on a number of short stories and poetry for publication in her next book.  Follow her on Facebook: Enriqueta.l.vasquez.