EXCERPT: THE DEATH OF FIDEL PEREZ BY ELIZABETH HUERGO

Every Wednesday The Latina Book Club will feature excerpts
from exciting novels by Latino authors.

This excerpt seems most apropos because of the death of the real Fidel Castro this past week. 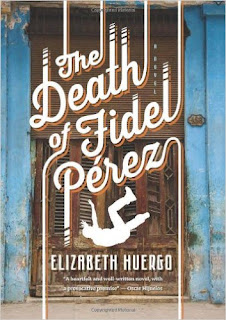 One particular good citizen, Saturnina, was squatting on a doorstep just a few blocks away, feeding a hard biscuit to a hungry stray dog, when she heard the news that Fidel and his brother had fallen. Saturnina rose from her corolla of ragged skirts and began to walk toward the throng of people gathering before the building and spilling over into the street, blocking the morning traffic. Though she could see nothing of what had happened, in a swirl of petticoats and skirts she began to mimic the words she heard: “¡Socorro! ¡Fidel calló! Help! Fidel has fallen!”

Saturnina, Sybil of the succulent bit of news that lodges like a string of pork gristle in the space between back teeth, began to fidget and whirl her way through the edges of the gathering crowd, calling out what she had instantly accepted as fact: The apocalypse that would precede the return of her son Tomás, whom she had lost decades earlier in the violent interregnum between Fulgencio Batista and Fidel Castro, had begun.

“¡Fidel calló! His brother has fallen, too!”

Stepping and swirling, the old woman tripped along the farthest perimeter of the bloody scene. As she passed along the streets calling out her news, housewives peered through rusted iron rails, pulling back quickly into darkened interiors. Men and women on errands or on their way to work or school stopped to listen, then sped on, looking back over their shoulders nervously.


*Excerpt from the novel THE DEATH OF FIDEL PEREZ by Elizabeth Huergo printed by permission of Unbridled Books. All rights reserved.

BOOK SUMMARY: On July 26, 2003, the 50th anniversary of the Moncada Army Barracks raid that sparked the Cuban revolution, something unexpected happens. When Fidel Pérez and his brother accidentally tumble to their deaths from their Havana balcony, the neighbors’ outcry, “Fidel has fallen!” is misinterpreted by those who hear it. That wishful mistake quickly ripples outward on the running cries of the people, and it gloriously reawakens a suppressed city.

ABOUT THE AUTHOR: Elizabeth Huergo was born in Havana and immigrated to the United States at an early age as a political refugee. A published poet and story writer, she lives in Virginia. THE DEATH OF FIDEL PEREZ is her first novel. Visit her at www.elizabethhuergo.com.