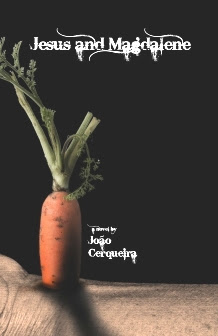 JESUS AND MAGDALENE
by João Cerqueira
Line by Lion Publications

Yes, this novel is about The Second Coming.

Book Summary:  Jesus returns to earth and meets activist Magdalene who is fighting for a better world. He finds an extremist ecological group, which is plotting to destroy a maize plantation it believes to be genetically modified. Then, he observes the rise up against a tourist development that is built on a forest preserve. Finally, he witnesses an armed conflict between blacks and gypsies. However, although he limits himself to accompanying Magdalene, attempting only to pacify those on bad terms, he is unable to escape the fury of mankind. And only a con man will recognize him.

According to the gypsy community, it was the blacks who started the riots.

A gang of adolescents, who liked to harass gypsy women and to scrawl graffiti insulting the virility of the men, entered the gypsy café and, after refusing to pay for their drinks, smashed up the furniture and stole the takings from the till. Knowing that calling the police would only cause more problems, the gypsy community was forced to solve the problem on its own, to dispense their own justice. A meeting was held in the patriarch’s house and it was decided to retaliate that very day, “because with us it’s an eye for an eye, a tooth for a tooth, and no one laughs at the gypsies for long.” They then went after the assailants. And it wasn’t hard to find them, as they were celebrating the raid in one of their houses, in euphoric fashion. The gypsies weren’t the first to shoot, however, because bullets began to fly as soon as they rounded the corner of the road in which the gang was lurking. From that night on, the blacks started to attack any gypsy; even women and children weren’t spared.

Questioned on what had happened, Dona Eufrásia, a gypsy in her sixties, who sold designer clothes at the market, said the following: “Of course they’re the ones that started it. Who else could it have been? These blacks are bad blood! They leave their children on the street and the girls will do it with anyone. They sell drugs and rob people. I’ve never seen one do a day’s work. Do you know what they want? They want to kick us out of here and take our houses. They should stick them all in a boat and send them back to where they came from.”

According to the black community, the whole thing happened differently.

No robbery took place at the café, and no one caused any damage to the premises. It was a Saturday evening and the boys had decided to have a beer and chose this place by chance. They entered in an orderly manner and politely asked to be served. But the café owner replied, “We don’t serve blacks here, each to his own.” At that very moment, the gypsies got up from their tables and started to shove them outside the establishment. Still not happy, outside they set about pummelling them with punches and kicking them. In the end they chased them away, forcing them to take refuge in a house nearby. It was then that some of the gypsies pulled out their pistols and began firing at the windows before others arrived with shotguns, adding to the fusillade. The young men’s reaction was defensive; if they hadn’t fought back they would have met their maker, as the gypsies were preparing a raid on the house.

A witness to the event, Lourenço Marques, godfather of one of the victims and retired builder, got his feelings off his chest. “Everyone knows it was the gypsies who attacked us. We are a serious people around here, we don’t want trouble with anyone. But, with the gypsies it’s impossible, man! They think that this place is theirs, they don’t respect anyone, they threaten you and pull out their weapons for the slightest thing. Robbery and drugs are their main source of income. Have you ever seen them working or picking up rubbish? Of course not. These problems will only come to an end when they are all thrown into prison.”

For her part, another resident, Dona Lurdes, housemaid and white — but whose dark complexion and curly hair seemed to want to deny her Caucasian status — also gave her opinion of the facts. “Whose fault is it? It’s both their faults. It was peaceful here before all these blacks and gypsies got here. Everyone knew and helped each other, the neighbors were like a family. If you needed a bay leaf you just knocked on your neighbor’s door; people looked after other people’s children. But after they arrived our neighborhood became hell, what with stealing, drugs, fighting, shooting. You can’t sleep at night for all the racket. It’s scary around here. It’s enough to make you sick with worry. And the police don’t lift a finger. If it was up to me, I’d send them all back to where they came from.”###

Excerpt published with permission. All rights reserved by author.

About the Author: JOAO CERQUEIRA is the author of eight books published in six countries.  THE TRAGEDY OF FIDEL CASTRO won the USA Best Book Awards 2013, the Beverly Hills Book Awards 2014, the Global Ebook Awards 2014, was finalist for the Montaigne Medal 2014 and was considered by ForewordReviews the third best translation published in 2012 in the United States. JESUS AND MAGDALENE won the silver medal in the 2015 Latino Book Award and was considered by the unheard-voice.blogspot one of the best books published in 2015. The short story, A house in Europe, won the 2015 Speakando European Literary Contest, received the bronze medal in the Ebook Me Up Short Story Competition 2015 and an honorable mention in the Glimmer Train July 2015 Very Short Fiction Award. His works are published in The Adirondack Review, Ragazine, Berfrois, Cleaver Magazine, Bright Lights Film, Modern Times Magazine and others. Visit him at http://www.joaocerqueira.com/.