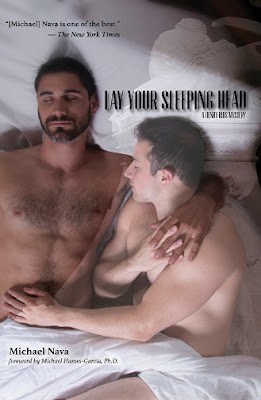 Thirty years ago, THE LITTLEDEATH introduced Henry Rios, a gay, Latino criminal defense lawyer who became the central figure in a celebrated seven novel series. LAY YOUR SLEEPING HEAD is a brilliant reimagination of that first crime novel by its author Michael Nava. It’s coming out in December, just in time to make a great holiday gift. Hint. Hint.

I stood in the sally port until the steel door lurched back with a clang and then stepped into the jail. A sign ordered prisoners to proceed no further; an emphatic STOP was scrawled beneath the printed message. I looked up at the mirror above the sign where I saw a slender, olive-skinned, dark-haired man in a wrinkled seersucker suit. I adjusted the knot in my tie. A television camera recorded the gesture in the booking room where a bank of screens monitored every quarter of the jail.

It was six-thirty a.m., but in the windowless labyrinth of cells and offices in the basement of Linden’s city hall, perpetually lit with buzzing fluorescent lights, it could have been midnight. Only mealtimes and the change of guards communicated the passage of time to the inmates. I had often thought the hardest part of doing time was that time stood still; serving a sentence must feel like scaling a mountain made of glass.

Everyone in the Public Defender's office had to take the jail rotation. Unlike my colleagues, I didn’t mind it. If, as my law school teachers had insisted, the law was a temple, it was a temple built on human misery and jails were the cornerstones. It was salutary to have to encounter the misery on a regular basis because otherwise it became too easy to believe that trials were a contest between lawyers to see who was the craftiest. It was good to be reminded that when I lost a case someone paid a price beyond my wounded pride. Not that I was in particular need of that memo at the moment.

A few months earlier, I’d lost a death penalty case where, rara avis, my client was innocent. After the jury returned its guilty verdict, I snapped. When the judge asked the usual, “Would you like to have the jury polled, Mr. Rios?” I jumped to my feet and shouted, “This isn’t a jury, it’s a lynch mob.” He warned me, “Sit down, counsel, or I’ll find you in contempt.” I unloaded on him. “You could never hold me in more contempt than I hold you, you reactionary hack. You’ve been biased against my client from day one . . .” I continued in that vein until the bailiff dragged me out of the courtroom and into the holding cell.###

Excerpt published with permission. All rights reserved by author.

Read our review of Michael Nava's THE CITY OF PALACES by clicking here.

About the Author:  MICHAEL NAVA is the author of an acclaimed series of seven novels featuring gay, Latino criminal defense lawyer Henry Rios which won six Lambda Literary Awards.  In 2000, he was awarded the Bill Whitehead Award for Lifetime Achievement in LGBT literature.  The New York Times review of the last Rios novel called him “one of our best.” His most recent novel, THE CITY OF PALACES, was published in 2014 by the University of Wisconsin Press.  It was a finalist for the 2014 Lambda Literary Award for best gay novel and was awarded the 2014 International Latino Literary Award for best novel. His new novel LAY YOUR SLEEPING HEAD, a reimagining of the first Henry Rios novel published 30 years ago, will appear in fall 2016 from Kórima Press. Visit him at http://michaelnavawriter.com/.