EXCERPT: LUCK IS JUST THE BEGINNING BY CELESTE LEON

and Happy Thanksgiving to you and yours! 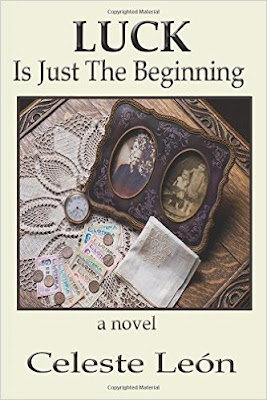 LUCK IS JUST THE BEGINNING
By Celeste León
Floricanto Press

Book Summary:  This novel is based on Celeste Leon’s father’s true story – he won the Puerto Rican lottery and used the winnings for the benefit of all. It’s fiction but an inspiring heroic adventure.  Read our review of LUCK IS JUST THE BEGINNING by clicking here.  And click here for Celeste Leon’s post about her father.

Ramon León had a powerful premonition. Something extraordinary was about to happen.

Just that morning, he shot an unprecedented seven free throws in a row. He watched the seventh ball soar into the air and sail through the tattered net when numbers appeared, high in the sky above the palm tree that held the faded backboard nailed to its mighty trunk. A 14 trailed by three zeros pulsed red above the clouds, so vibrant that Ramón believed God Himself had painted it.

His heart fluttered in his chest like a moth caught in an oil lamp. He could scarcely breathe before the vision faded away in the breeze. A trail of gooseflesh swept up his arms until his mother’s voice broke his trance, calling him to work at her tienda de ropa. Ramón tucked his basketball under his arm and hurried across the plaza, the only paved area in his village.

He passed the whitewashed colonial Catholic church and the enormous ceiba trees shading park benches. This morning, Ramón was the only person in the plaza, but the benches would soon be occupied by young boys who polished shoes for a penny with their square limpias botas and old too frail to work in the sugar cane fields.

Ramón stepped into the store, legs trembling—had he imagined that vision in the sky? Would everything suddenly look different? No, the shelves were lined with the same bolts and rolls of cotton, broadcloth and muslin from which his mother fashioned shirts, pants or skirts that villagers ordered when they could afford it. He placed the basketball under the counter where he tallied purchases, and washed his hands in the old ceramic basin. He began to press and straighten the rolls tight against one another when the tarnished brass doorbell jingled to announce his first customer, an elderly jíbara from the barrio.

Ramón nodded to acknowledge her. He wondered: what did it mean—the number above the clouds? What other extraordinary things might happen today? When the peasant woman laid seven brown buttons on the worn counter and counted fourteen pennies, a revelation struck him like a fist: fourteen cents, seven buttons, and seven free throws. He was the seventh child to survive after his beloved mother lost her first eight babies, the lucky one, born in a caul on the seventh day of the seventh month.

There was no reason the lottery vendor wouldn’t roll into Maunabo in his battered old truck. Hurricane season had passed, the roads were clear and the sky electric blue. The tropical breeze carried the scent of the sea.

At that moment, Ramón felt the gooseflesh again. Now he knew what those numbers meant. He must play that number in the lottery.###


Excerpt published with permission. All rights reserved by author.

About the Author: CELESTE LEON is an award winning author. Her passion for the past ten years has been writing Luck is Just theBeginning, the novel inspired by the true story of her father’s life in Puerto Rico, released by Floricanto Press on November 23, 2015.  The book earned a Mariposa Award for Best First Book in the 2016 International Latino Book Awards, a Finalist in Multicultural Fiction in the 2016 International Book Awards and was selected as Book of the Month (August 2016) by the Las Comadres National Latino Book Club. Ms. León is a 2013 Alumna of The Squaw Valley Community of Writers. Her personal essay, Finding Home, about her travels to Puerto Rico, won first prize in the Annual Contest for High Sierra Writers of Reno, Nevada; her short stories have appeared in Chicken Soup for the Soul, Celebrating People Who Make a Difference and The Preservation Foundation. To contact Celeste or for additional information, including reviews, interviews such as NPR, and scheduled appearances visit www.celesteleon.com. Also, visit her at www.celestejleon.blogspot.com and
www.facebook.com/AuthorCelesteLeon.