EXCERPT WEDNESDAY! SANGRE: THE COLOR OF DYING BY CARLOS COLON

This is the season to be jolly but we have a great “dark” excerpt for readers from our friend Carlos Colón from book 1 of his Sangre Series -- SANGRE: THE COLOR OF DYING.  No reason to be scared…if you’ve been good!

Here’s a mini interview with Carlos:

Q: What is your favorite color?
Carlos Colón:  How interesting that you ask that, since the color red is such a pertinent part of Sangre. Nothing entrances a man more than the sight of a woman in a red dress. Sadly, that led Nicky into a path where no man wants to go. That being said, I hate to be so ordinary, but yes, red is my favorite color.

Q:  Your hero Nicky is a vampire, an immortal. Would you like to live forever? Why or why not?
Carlos:  There are two sides to living forever. On one side is you get to see the world around you continue to develop and continue enjoying the good things life can bring. On the other side, which is what Nicky suffers, you continue to suffer the losses of those you love as they grow older and naturally pass away. So selfishly, I would only want to live forever if those I love could also be with me. I suppose that's what Heaven is for.

Q:  You are from the Bronx so what is your favorite thing to do in New York City during the Christmas holiday?
Carlos:  New York City is truly a Christmas Winter Wonderland. A perfect Christmas is New York starts with a walk-through tour of the Christmas display at Macy's followed by visiting the tree at Rockefeller Center, then going to see the Rockettes at the Radio City Music Hall Christmas Show (although these days, a Christmas like that could be quite expensive). ¡Felicidades a todos! 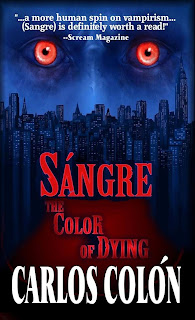 It would have been a stretch to have imagined five-year-old Nicky Negrón becoming the nocturnal predator he is today. In Papi’s eyes I was un ñoño—a whiny little mama’s boy that was afraid of the night. And actually, that was understating it. To put it more accurately, I was scared shitless of the night.

Mami, on the other hand, was the enabler. Not only was I still sucking my thumb at that age, I was also still drinking out of a baby bottle. Bullies quickly caught on and pushed little Nicky around until he would run to Mami in tears. It was several years before Dani would come into the family, so it was all me at that time. Mami was happy to give me all the attention I needed and I was even happier to be on the receiving end, so me trying to fall asleep alone in my bedroom? Yeah, right. I would high tail it at the first shadow outside my window or the first creak behind the walls.

At first Mami and Papi tried helping me through the shivers by leaving my bedroom door open. The light would shine in from the living room while they were watching TV, and I would fall asleep to the sounds of Ed Sullivan, Jackie Gleason or Lucille Ball. But then there were other nights when I was still awake after they went to bed. Those sucked. Sometimes I’d whine out loud to let them know I was scared. Other nights, if I heard a sound I didn’t like, I’d run to their bedroom and jump in their bed, wedging myself between them.

That really tested Papi’s patience. It kept them from rocking that headboard against the wall, something they used to like to do a lot. If it wasn’t every night, it had to be close. I still don’t know how I wound up with only one sister.

To try and macho me up, Papi would ride me, telling me I had to toughen up if I was to grow up to be un hombre. But Mami, she was no help. She would tell him I was just a baby and let me fall asleep in her arms as I took in the scent of her hair, which brought me comfort and made me feel safe. She was more patient in that way than Papi.

“Never be afraid of the night,” she said. “Do you feel safe in my arms, baby?”

“Good, then always let the night remind you of how you feel in my arms and you will never fear the night again. If you can always remember that feeling, you will learn to love the night and you will always feel safe.”

It was a nice try but it didn’t work. The more Mami protected me, the more I wanted to be near her—especially at night. It took the eventual concealed threat of Papi’s chancla, the slipper he used to whoop my ass with. Now that worked. That resolved the problem of el ñoño raiding their bedroom.

Years later when I was a teenager, in the aftermath of Dani’s death tearing our family apart, the night was no longer a threat to me. The horror that I had experienced—the worst horror imaginable—occurred during the day. And it was far worse than any possible boogey man I might have envisioned creeping out of the dark. The night had now become a reminder of the love, safety, and comfort of my mother’s arms, just as she said it would. It was a feeling I would never come across again.

It was only at night that I could remember the Mami that cradled me in her arms instead of the one that could barely stand the sight of me. I fell asleep longing to have that love again, hoping that someday I could find a way to earn it back.

When morning came around, everything seemed harsh again. I felt exposed; that everyone I passed knew of my failure, the older brother whose sister died a horrible death under his care. I felt it in the streets, and I felt it in the hallways at school. The evening couldn’t come fast enough. I wanted to be alone.

Alone in the comfort of the night.


Excerpt published with permission. All rights reserved by author.

Book summary:  SANGRE: THE COLOR OF DYING is a unique, genre-bending mix of tragic family saga, urban fantasy and paranormal horror. It introduces readers to Nicky Negrón, a Bronx-raised Puerto Rican insurance salesman, happily married to his college sweetheart with two children, who is lured into a romantic tryst by Simone, a ravishing undead woman. Nicky dies and returns as a night dweller himself. He refuses to prey on the innocent so he decides to feed only from the undesirables of society. Nicky thinks he is as low as you can go, but Simone is not done with him yet.

About the author:  Carlos Colón is a Bronx-born and raised Puerto Rican singer/songwriter currently living on the Jersey Shore. He graduated from Lehman College, CUNY with an English degree in Creative Writing and his play "Jerome" won Honorable Mention for the Jacob Hammer Memorial Prize in 1979. His first novel, SANGRE: THE COLOR OF DYING was published by Black Bed Sheet/Diverse Media Books in March 2016, and it introduced readers to the foul-mouthed urban vampire, Nicky Negrón, a tragic anti-hero haunted by loss. Visit Carlos at www.sangrethenovel.com and www.facebook.com/sangrethenovel.