Every Wednesday The Latina Book Club features an excerpt from an exciting new book. This week we are highlighting
A MONSTER CALLS by Patrick Ness, which has been turned into a movie directed by the Spanish director J.A. Bayona.
We'd like to thank publisher Candlewick Press for copies of the book for our readers.
The movie opens on Three Kings Day, January 6, nationwide. 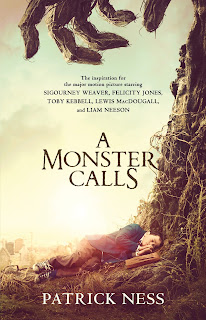 The monster showed up just after midnight.

As they do. Conor was awake when it came.

“Go away,” Conor whispered into the darkness of his bedroom, trying to push the nightmare back, not let it follow him into the world of waking. “Go away now.”

He glanced over at the clock his mum had put on his bedside table. 12:07. Seven minutes past midnight. Which was late for a school night, late for a Sunday, certainly.

He’d told no one about the nightmare. Not his mum, obviously, but no one else either, not his dad in their fortnightly (or so) phone call, definitely not his grandma, and no one at school. Absolutely not.

What happened in the nightmare was something no one else ever needed to know.

He listened, straining against the silence, but all he could hear was the quiet house around him, the occasional tick from the empty downstairs or a rustle of bedding from his mum’s room next door.

And then something. Something he realized was the thing that had woken him. Someone was calling his name.

BOOK SUMMARY:  The bestselling novel about love, loss and hope from the twice Carnegie Medal-winning Patrick Ness. Conor has the same dream every night, ever since his mother first fell ill, ever since she started the treatments that don’t quite seem to be working. But tonight is different. Tonight, when he wakes, there’s a visitor at his window. It’s ancient, elemental, a force of nature. And it wants the most dangerous thing of all from Conor. It wants the truth. Patrick Ness takes the final idea of the late, award-winning writer Siobhan Dowd and weaves an extraordinary and heartbreaking tale of mischief, healing and above all, the courage it takes to survive.

ABOUT THE AUTHOR:   PATRICK NESS (Screenwriter; Author)
In June 2012, Patrick Ness’ novel A MONSTER CALLS, inspired by an idea from Siobhan Dowd and illustrated by Jim Kay, became the first book to win both of the U.K.’s oldest and most prestigious children’s book awards, the CILIP Carnegie Medal and the Kate Greenaway Medal for illustrations. Mr. Ness became only the second author to win two consecutive Carnegie Medals. A MONSTER CALLS also won The Children’s Book of the Year Award at the Galaxy National Book Awards; the Red House Children’s Book Award; Germany’s Jugendliteratur Prize; and the U.K. Literary Association’s Children’s Book Prize.

His much-praised “Chaos Walking Trilogy” is being developed by Lionsgate as a feature film series. The first book in the trilogy, THE KNIFE OF NEVER LETTING GO, won The Guardian’s Children’s Fiction Prize in 2008 as well as The Book Trust Teenage Prize. The second book, THE ASK AND THE ANSWER, won the Costa Children’s Book Award in 2009; and the third book, MONSTERS OF MEN, brought Mr. Ness his first Carnegie Medal in 2011.

His books have been translated into 37 languages. His novel for adults THE CRANE WIFE was inspired by a Japanese folk tale and was selected for Oprah’s Book Club in the U.S., with Mr. Ness then being shortlisted for UK Author of the Year at the 2013 National Book Awards. His novels also include MORE THAN THIS (first published in 2014) and THE REST OF US JUST LIVE HERE (2015), both for young adults; the latter is to be issued in paperback in the U.S. in September 2016. He wrote Tip of the Tongue, a Doctor Who short story, as part of the anthology celebrating the Doctor’s 50th Anniversary in 2013. Mr. Ness has created and scripted the new BBC series Class; the eight-episode show is a young adults-themed spinoff of Doctor Who.

He taught Creative Writing at Oxford University for three years. Mr. Ness is a native of Virginia, raised in the U.S., who now makes his home in London.

ABOUT THE FILM MAKER:  J.A. BAYONA (Director)
J.A. Bayona’s most recent feature film as director was The Impossible, starring Naomi Watts, Ewan McGregor, and Tom Holland; it was based on the powerful true story of a family’s survival of the tragic Indian Ocean tsunami in 2004. The Impossible grossed more than $180 million at the worldwide box office and brought Ms. Watts Golden Globe, Screen Actors Guild, and Academy Award nominations. Mr. Holland received honors including an Empire Award for Best Newcomer. The Impossible won five Goya Awards, which are Spain’s Oscars equivalent, including Best Director; and six Gaudí Awards, including Best Director.

Prior to making A MONSTER CALLS, Mr. Bayona directed the first two episodes of Showtime’s series Penny Dreadful, starring Eva Green, which instantly attracted a loyal following. Having completed A MONSTER CALLS, he will next direct the new Jurassic World movie, for release in June 2018.

Born in Barcelona, he grew up with a passion for film. This led him to become a journalist and later to study directing, at the Cinema and Audiovisual School of Catalonia (ESCAC).

After directing two short films, My Holidays and The Sponge Man, Mr. Bayona met screenwriter Sergio G. Sánchez, who gifted him with the script for The Orphanage, which became his first feature as director. The Orphanage world-premiered at the 2007 Cannes International Film Festival to a 10-minute standing ovation. It was then released nationally in Spain, and its opening four-day box office was the highest of the year and at the time the second-highest ever for a Spanish film. The Orphanage was nominated for 14 Goya Awards, winning seven including Mr. Bayona’s for Best New Director.