Poetry is like a song, like a psalm, like a prayer. Poetry is different things to many people, and April being Poetry Month,
The Latina Book Club is celebrating by featuring Latino poets all week long. 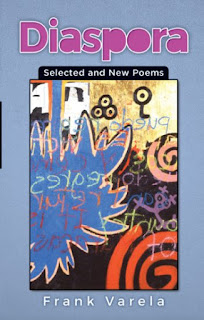 “All I wanted was the impossible:
To be the who I am in a land
unafraid of the me I have become.”—Frank Varela

Given all that has been happening with Puerto Rico this past year, we searched for a book of poems that spoke to us about the island; about being a part of it and not; about dreams and reality; about success and disappointment; about love and loss.

Summary:  In this collection of 55 poems, Varela writes about growing up Puerto Rican in Brooklyn, noting that there are two types of Puerto Ricans: “those born on the island, / others like me, / the children of exiles.” Pondering the universal sentiment of immigrant children, he notes that he was considered a spic in the United States and a gringo in the land of his parent’s birth. Expressing love and appreciation for his Puerto Rican family and culture, Varela’s poems reflect on the universal joys and pains of everyday life. This collection contains a mix of previously published and new poems that offers a survey of the poet’s work from 1988 to the present.

ABOUT THE AUTHOR:  Frank Varela was born and raised in Brooklyn, New York City, and he was educated in Puerto Rico and the Midwest. Varela lived in Oak Park, Illinois and in Cleveland before his latest move to southern New Mexico, where he resides with his wife.  He has published four volumes of poetry, including Serpent Underfoot (March Abrazo Press, 1993) and Bitter Coffee (March Abrazo Press, 2001), Caleb’s Exile (ELF Creative Workshop, 2009), and Diaspora: New and Selected Poems (Arte Publico Press, 2016).

His children's stories have been published in Front Row and in publications by Arte Publico Press. Other noteworthy journals featuring his work include Another Chicago Magazine, Halogen, Hammers, The Americas Review. He is also featured in the anthology Power Lines (1999), which commemorates the first decade of the Guild Complex, its poets, and its publishing wing, Tia Chucha Press. Mr. Varela holds degrees from the Catholic University of Puerto Rico, Central Michigan University, and the University of Wisconsin at Madison. He was named Illinois Hispanic Librarian of the Year in 1997, and he his writing has earned him grants and recognition from the Illinois Arts Council.