BOOK OF THE MONTH: SPANISH COFFEE: BLACK, NO SUGAR BY A.B. LUGO (DEBUT)

The Latina Book Club is pleased to announce it's August Book of the Month -- an emotional and heartfelt collection of poems that will touch everyone's heart.

In 2015, the award-winning actor and playwright lost both his parents within months of each other. To cope with his grief, he dedicated himself to writing a poem a week in 2016.  SPANISH COFFEE: BLACK, NO SUGAR – named for the way his Dad liked his coffee – chronicles a year of his life, his grief, and his hard journey forward.

Lugo wrote his poems in all forms – free verse, haiku; in English, Spanish and Spanglish. Some of his poems span several pages; others mere lines.  Through his dated poems, readers watch as Lugo emerges from his cocoon of sorrow. A “former caterpillar” now a “newly-formed butterfly,” Lugo is renewed, reborn and ready to “take on the day.”

Lugo may be caught in his grief, but life forces him to go on living.  His poems also chronicle social injustices happening around him like the numerous shooting of black / brown men.  He is a brown man with reason to worry as racism and shootings escalated nationwide in the past two years.  We wonder with him, “when will their lives truly matter?”

The poem that touched us most was “That Moment” (20-26 May 2016).  He shares with us the breakup with his lover, and he comes to an insightful breakthrough when he realizes that he’ll be alright and that he has “adopted a new role that of his own savior” not just in his love lif,e but in all his life.

Lugo becomes his own savior. Time passes.  He learns to accept and adjust to his grief.  He may never be as carefree as he was when he was a child, but he’ll try. And when 2017 rolls around, he finally understands why his mother always cried for the New Year, for loved ones long gone.  He too shed tears that New Year’s-- tears of remembrance, of love. Those tears helped heal him and helped clear the way for the continued journey forward.  Lugo states it best in his closing poem Looking Forward/ Looking Back (2017-Epilogue):  his continued "journey of realizing (his) full potential.” ### 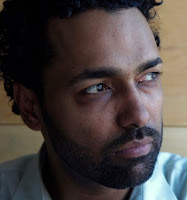 ABOUT THE AUTHOR:  A.B. Lugo is an award-winning actor, playwright and performer. Some of his poetry can be found in the anthology ME NO HABLA WITH ACENTO (Rebel Satori Press). SPANISH COFFEE: BLACK, NO SUGAR is his first published collection of poetry.