The Latina Book Club congratulates Linda LaRoche on her first book.
DUST UNTO SHADOW is the story of immigrants returning to their homeland and not being as welcomed as they thought they’d be.
Linda has gracious shared an excerpt with us via video.  Enjoy!

EXCERPT!  To hear an excerpt read by the author, click here. 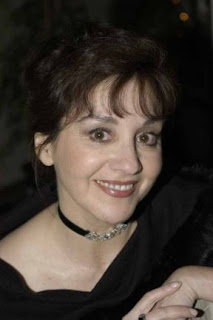 Q: Congratulations on your first book. We understand your grandmother and mom inspired the book. Tell us how? What is the book about?

LINDA LAROCHE:  My mother inspired the book and her immediate family. From the time I was a child I had an interest in genealogy and would ask my parents and grandmothers questions about their growing up years. In the early 1990's while living in Berlin, I had the opportunity to explore my creativity- I trained as a method actor and made a living from having a small part on a television series and commercials, A friend suggested that we do our genealogy through the LDS church. I thought it was far-fetched that the Mormon Church, a young American Institution would have records from Mexico. It wasn't until 2010, when I watched the reality show, "Who Do You Think You Are," that for the fun of it, I went online and by chance found my mother’s paternal grandparents wedding certificate. That got me started on a genealogy search that was facilitated through baptism certificates.  It’s then when I realized that no matter how humble one's circumstances, one wanted to ensure their child's soul a passage to heaven.

The search culminated in my finding that my mother wasn't Mexican as she had claimed. She was descended from Criollos and contrary to what she has said her family had not been in Mexico long. As I asked her questions, she slowly opened up to the past. She had always been an intensely private woman.  Perhaps it was her age or the timing, but as she opened up I heard stories unknown to me. As she spoke I knew the trust she placed in me was sacred and I was compelled to chronicle.

Her parents had left Guadalajara and came to the United States, setting in northern California, had children and my grandfather who was well-educated made a living as a telegrapher. However, he took to drink and abused my Grandmother. My grandmother fearing for her life had 6 children in the span of 8 years that depended on her, fled to her hometown for safety. But she miscalculated and encountered a living hell in Mexico. All comfort and modernity was gone and they leaped back time living more violence, the bleakness of poverty, cultural displacement, and color-consciousness.  The book explores the dark underbelly of life in Mexico in the 1930's and 1940's. 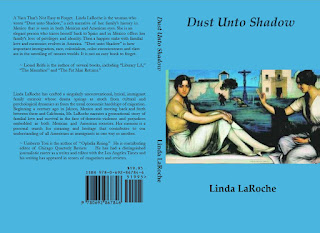 Q:  Children of two cultures are often caught between two worlds, unwelcome in either.  Is there a way to make them feel more at home, wherever that home is -- in Mexico or in US? Is assimilation the key to survival in "new land"? Is there a way to be part of the new home without losing one's culture?

LINDA LAROCHE:  My mother in Mexico constantly yearned to return to the States. Her transition coming to Los Angeles, with her young son was a city that was not familiar to her and she acclimated; she held onto her conventional beliefs and embraced the American life aspects of life she admired. She also instilled into her children Latino sensibilities (etiquette, manners, hospitality, etc.) not found in American culture.  While I wrote this book, I realized my grandmother felt rootless without a home.

I myself never felt American and Mexico doesn't hold my interest either. So where is home? Is it a geographical place, a place in time, or a state of mind? Whatever it is, it is a human dilemma which consumes emotion and contemplation. And transplants like me who go to Berlin, New York, San Francisco and float around seeking this elusive refuge.  Mystics would say home is within you. If I were to apply that statement to the concept of home, there would be no need to question because home can be anywhere one claims it to be.

Q:  You are a journalist by profession. Did that experience help you write faster? Better? Any advice for new Writers eager to pen their story?

LINDA LAROCHE:  I have a diverse background in the media, although of the many things I've done, I was in tune with journalism because I had equal parts of solitude and time with others. As a journalist, I worked freelance which gave me the opportunity to write about topics I cared about it. This empowerment and authenticity was and remains important to me. As a creative writer, I imagined the time and setting in DUST UNTO SHADOW since I have never been to where my mother grew up. Although we had the means to travel, we were shielded from trips to Mexico.  As a young woman, I made the voyage but an accident prevented me from visiting the village thus cutting my trip short. I used my imagination to add dialogue and give the story richness and texture.

However, like a journalist, I remain objective to the storyline and took a step back, only adding my thoughts at the end, including what I perceived to be at the root of the social injustice and the redemptive power of Love.  A writer first and foremost needs passion to sustain their goal. They should start with what they know, not talk about it, but write, be open to re-writes (there will be many more than you can imagine) have steely determination and most of all, fulfill their self-promises!

I wrote the book in 2010 while I was teaching creative writing at the College of Southern Nevada; my goal was to have it published the traditional way. I never gave up. Then on New Year’s Eve, saying good-bye to 2016, I said, that's it Linda, what are you waiting for. You see the value in this, don't wait for anyone else, and do it now! I then edited the copy, compiled the photos, started to research art, fonts, etc. and thoroughly enjoyed the process.  I'm highly organized so publishing was natural for me but when something technical went wrong, ordinarily I get frustrated, but I embraced it as you would a child I had given life to.

My maternal grandmother’s spirit was with me every-day. Other family members who I never met; literally jumped off the page. I knew their flaws and attributes and fell in love with all of them and was honored that we had this time. When it was time to say good-bye, I knew it wasn’t final, only a matter of time until we meet again. ### 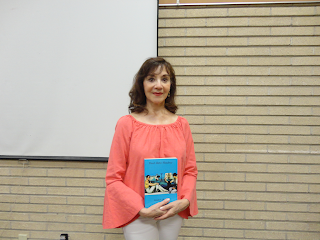 DUST UNTO SHADOW SUMMARY:   Benilde and her family lives are readjusted when they return to their homeland in Mexico.  There is ritual and routine, as it has been for generations. Having encountered a modern life in Northern California, the family shares the customs of Mexican life and rejects the insular rules that shape village existence.  They are viewed as outsiders and remain in the minority and despite trying to make a happy home life they find hostility that has molded their family's destiny for generations.   A powerful story about a family bonded by honor and separated by circumstances and culture.  Dust unto Shadow celebrates the bond of love that connects families while painting an unforgettable portrait of a dark period in Mexican history.

ABOUT THE AUTHOR:  Linda LaRoche is a writer with extensive experience in screenwriting, journalism, public relations, teaching, and short stories.  While working in the film industry, she produced The Trouble with Tonia, starring Lupe Ontiveros, and won the Silver Star Award for Producer in the Houston Film Festival.  It also won best film award in the San Sebastian Film Festival in Spain and is listed as one of the top 100 Hispanic-American films, on Chon A. Noriega’s, Aztlán Film Institute's Top 100 List.

As a journalist, her work appeared in many periodicals including The Los Angeles Times Sunday arts section, In Style magazine, and the Pasadena Star News.  Her fictional short stories have been published in literary magazines such as Glimmer Train Press and the Missouri Review.  She taught creative writing at the College of Southern Nevada mentoring budding writers, and helped others nurture their creative ideas from the abstract into polished execution.  Currently, she is an independent public relations consultant representing clients in the arts and personal development.  DUST UNTO SHADOW is her first novel.