BOOK OF THE MONTH! WICKED REMNANTS BY MANUEL A. MELENDEZ

Our Book of the Month is one that will make you laugh, cry and scream.
And why shouldn't it? It's Halloween!!
Here's an excerpt.  Happy Reading!! 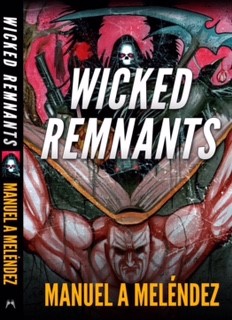 He rose from the black bushes like a solid shadow from death. His nightmarish yellow eyes stared at me with hatred. His enlarged pointed nostril flared as mucous dripped from its depth. His muscled hairy torso expanded to proportions of unbelievable massiveness. His arms were like tree trunks that ended into sharp huge claws.

From behind me I heard Deanna scream and my own fears were increased for the safety of us. With foolishness or machismo bravado overcoming my anguish I clenched my hands into fist and prepared if not to save my life, to at least save Deanna’s.

The wolf-like creature ripped through the shrubs, his almost human hoofs inching closer to me. His putrid breath an abomination. He glared at me with a grin of hellish confinement. A grin that grew and grew and grew, until all I could see was fangs crisscrossing other sharp fangs. Heavily steel-like jaws stretched beyond comprehension. He tilted his ponderous head and he howled with blood-dripping thunder from a throat that was neither human nor animal, but more from a demon spawned in the darkest and deepest gutters of Hell. 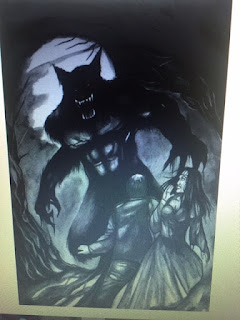 His bellow destroyed the entire concept of what was sacred and holy in this world. His knife-like claws slashed at me, and like a mere puppet I was thrown across the open meadow. My breath escaped from my lungs and added a tension of agonizing panic. I rolled to my knees and I searched for something to support me and to give me strength. To my delirium, what I found was the fast moving legs of the freak. He grabbed me in his claws and lifted me at least eight feet from the ground. I struggled for my freedom, but the more I battled the deeper his claws cut into my back. The warmth of my blood retreated from my veins as my head spun and my consciousness began to vanish from me. I knew that I was screaming, but the sounds were only vibrations in my throat as the shrieks of the fiendish hulk belittle my cries.

Deanna, my lovely and brave Deanna was still at my side. Instead to succumb at the atrocity before her, she armed herself with a splinter of a tree and clobbered severely at the beast. He ignored her feeble attempts in rescuing me as he trashed me to the ground embedding my face into the soft dry grass. He picked me up above his Herculean shoulders and bawl at the moon. With one talon he held me high and with the other he brushed Deanna aside as if she was an annoying fly.

I dug my fingers inside his eyes and the mad hurting scream that protruded from his foul-smelling mouth gave me an assertiveness to take this demon back to his savage land. He roared with bloodthirsty fury as he seized me by the neck and he flung me to the ground sending a numbness pain through my spine. He leaped upon me like a lover in heat as his fangs severed my neck in half. I felt the tendons on my neck pulling away from the bones and the blood splattering like a fountain out of control. I wanted to scream, but the scream only rose from my belly and stopped in my chest. As I entered a cold darkness that sooth my pains, faintly I heard the sound of gunshots and something amazingly heavy buried me to the blood soaked ground.
And there I died and there I was reborn under the Gypsy Moon.###

© Manuel A. Meléndez.  All rights reserved by author. Permission was granted to reprint excerpt and illustration.

WICKED REMNANTS SUMMARY:  Award winning author Manuel A. Meléndez dares you to walk with him on the dark side and enter into the macabre world of WICKED REMNANTS.  It is a collection of 16 bone-chilling stories that will take you to the place your nightmares begin.  From an old Gypsy curse to a serial killer at large to a whining tree possessed by old secrets to a diabolical enigmatic vampire.

ABOUT THE AUTHOR:  Manuel A. Meléndez is a Puerto Rican author born in Puerto Rico and raised in East Harlem, N.Y. He is the author of two mystery/supernatural novels, WHEN ANGELS FALL, and BATTLE FOR A SOUL, five poetry books, OBSERVATIONS THROUGH POETRY, VOICES FROM MY SOUL, THE BEAUTY AFTER THE STORM, MEDITATING WITH POETRY, and SEARCHING FOR MYSELF. Two collection of Christmas short stories, NEW YORK CHRISTMAS TALES, VOL. I and II, and IN THE SHADOWS OF NEW YORK: TWO NOVELETTES. The novel WHEN ANGELS FALL, was voted by The LatinoAuthors.com as the Best Novel of 2013, while BATTLE FOR A SOUL was awarded Honorable Mention in the 2015 International Latino Awards for Mystery Novels. His short story A KILLER AMONG US was published by Akashi Books in SAN JUAN NOIR anthology. For more information please visit his website. www.manuel-melendez.com.

ABOUT THE ILLUSTRATOR:  Henry Simon was born in Barcelona, Spain. He began his art studies on illustration, painting and comic books in 1995. He began his professional career in 2000 as a cartoonist and illustrator in various newspapers and books. From 2001 to 2004 he worked as a comic book artist and writer for different publishers in Spain and USA. From 2004 to 2010 he moved to Japan where he was one of the animators for I.G. Studios and was a Mangaka’s assistance for Kpdansha Publisher. He returned back home to Barcelona in 2011 and began his career as a comic book artist and illustrator, working for publishers in USA, Europe, Canada and Japan. Please visit his website www.simon-artist.deviantart.com   to follow his amazing work.