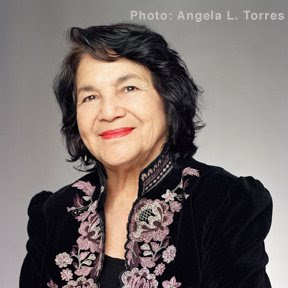 We must use our lives to make the world
a better place to live, not just to acquire things. That is what we are put on the earth for. – Dolores Huerta
The Latina Book Club wishes
Dolores Huerta a Happy 90th Birthday!


Dolores Huerta is the Voice of the Working Poor. She is a Labor Leader, a Trailblazer, a Visionary.  She worked along with César Chávez to form the United Farm Workers of America, all while caring and raising her children.  She was an extraordinary woman, and the recipient of the Presidential Medal of Freedom form Barack Obama in 2012.  The following books help celebrate her life and her accomplishments. Felicidades! DOLORES HUERTA: GET TO KNOW THE VOICE OF MIGRANT WORKERS
By Robert Liu-Trujillo
Capstone Press

Dolores Huerta led farm workers to demand better pay, reasonable hours, and respect on the job. She knew laws needed to be passed to protect the workers and improve their lives. Learn more about this influential activist and her fight for what was fair.

This book introduces readers to Dolores the teenager.  It follows her life from the mining communities of the Southwest where her father toiled, to the vineyards and fields of California, and across the country to the present day. As she worked for fair treatment for others, Dolores earned the nation’s highest honors. More important, she found her voice.

Since the 1950s, Latina activist Dolores Huerta has been a fervent leader and organizer in the struggle for farmworkers’ rights within the Latina/o community. A cofounder of the United Farm Workers Union in the 1960s alongside César Chávez, Huerta was a union vice president for nearly four decades before starting her own foundation in the early 2000s. She continues to act as a dynamic speaker, passionate lobbyist, and dedicated figure for social and political change.