The Latina Book Club remembers and honors All the fallen Soldiers and Heroes – men and women – who have sacrificed so much for our country’s freedom.  We can never Thank Them enough!

Here are some books that honor our Latino Soldiers.  Enjoy. 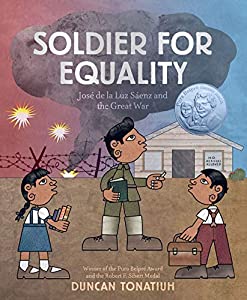 Josè de la Luz Sáenz believed in fighting for what was right. He fought in WWI and was an invaluable member of the Intelligence Office in Europe. But even in the army, he faced prejudice. When he returned home, he joined other Mexican American Veterans to create the League of Latin American Citizens (LULAC), one of largest and oldest Latinx civil rights organizations. 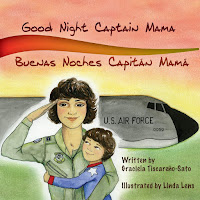 A sweet, reassuring bedtime conversation between a military Mom and her child about her uniform and why she serves, and what she does in the unusual KC-135R aerial refueling airplane.  This book contains both English and Spanish versions.

Not all enemies are foreign. Three Puerto Rican servicemen, members of the 65th Infantry Regiment, The Borinqueneers, meet on the battlefields of the Korean War in 1952. All three from different backgrounds and upbringing, find themselves fighting discrimination in their ranks, while training to fight against the enemy abroad.

PATRIOTS FROM THE BARRIO
By David Gutierrez
Westholme Publishing

This is the Inspiring True Story of a Segregated Unit Whose Exploits Underscore the Forgotten Latino Contribution to the Allied Victory in World War II. As a child, Dave Gutierrez hung on every word his father recalled about his cousin Ramon, "El Sancudo" (the mosquito), and his service in World War II, where he earned a Silver Star, three Purple Hearts, and escaped from the Germans twice. When Dave grew up, he wanted to learn more about his cousin, and discovered a whole unit of only Mexican American soldiers and heroes.

Most of these Chicano soldiers were teenagers in high school.  They never returned to finish school, but they were heroic on the battlefields abroad.  Their most lasting imprint was back in their homeland by forging a path for their children and for subsequent generations.

22 Mexican-American families who lived on one street sent 57 of their children to fight in World War II and Korea—more than any other place that size anywhere in the country. Eight of those children died. This is the story of those brave men and their families, how they fought both in battle and to be accepted in an American society that remained biased against them even after they returned home as heroes.    ##

THANK YOU!
To all the Men and Women Who Serve, Who Have Fallen
All Gave Some and Some Gave All