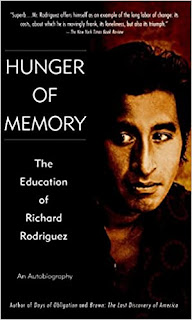 Real revolution in language is taking the stranger’s tongue and using it better than he.—Richard Rodriguez

The difficult journey of an immigrant child struggling to navigate two cultures, two languages, two worlds is the same now as it was in the 1960’s and 1970's.  The struggle to learn a new language, to be accepted, to belong to the new world takes a toll on the child and can often threaten the bonds of family and culture.  Such is Richard’s story.

HUNGER OF MEMORY is the story of Mexican-American Richard Rodriguez, who begins his schooling in Sacramento, California, knowing just 50 words of English, and concludes his university studies in the stately quiet of the reading room of the British Museum.  Here is the poignant journey of a “minority student” who pays the cost of his social assimilation and academic success with a painful alienation — from his past, his parents, his culture — and so describes the high price of “making it” in middle-class America.

Provocative in its positions on affirmative action and bilingual education -- Many resented that Richard was against those programs which many felt benefited minorities. --, HUNGER OF MEMORY is a “powerful political statement, a profound study of the importance of language ... and the moving, intimate portrait of a boy struggling to become a man.”

HUNGER OF MEMORY was rejected eight times before being published to critical success, but his family hated it.  They were embarrassed that he had shown the world how separated he had become from them as he became an American; that he had dared shown the difficulty and loneliness of being an immigrant child in a new world.

Richard accepted the hardships and the estrangement from his family.  He embraced assimilation not to get lost in a new identity, but to find his own voice as a Latino in America.

ABOUT THE AUTHOR:   Richard Rodriguez received a B.A. from Stanford University, an M.A. from Columbia University, was a Ph.D. candidate in English Renaissance literature at the University of California, Berkeley, and attended the Warburg Institute in London on a Fulbright fellowship.  Instead of pursuing a career in academia, Richard became a noted prose stylist. He worked as a contributing editor to newspapers and magazines, including Harpers and the Los Angeles Times. His first book, Hunger of Memory: The Education of Richard Rodriguez, was published in 1982.