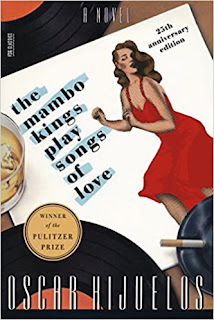 The taste of you remainsClinging to paradiseBut as the distance from you growsAll that my heart ever knowsHunger for your kissLonging for your touchBeautiful Maria of my soul
--Lyrics, Beautiful Maria of My Soul
Song by Los Lobos

We loved the book, the movie and the sequel !!!

SUMMARY:  It's 1949 and two young Cuban musicians make their way from Havana to the grand stage of New York City. It is the era of mambo, and the Castillo brothers, workers by day, become stars of the dance halls by night, where their orchestra plays the lush, sensuous, pulsing music that earns them the title of the Mambo Kings. This is their moment of youth, exuberance, love, and freedom―a golden time that decades later is remembered with nostalgia and deep affection.

Hijuelos's marvelous portrait of the Castillo brothers, their families, their fellow musicians and lovers, their triumphs and tragedies, re-creates the sights and sounds of an era in music and an unsung moment in American life.

Exuberantly celebrated from the moment it was published in 1989, THE MAMBO KINGS PLAY SONGS OF LOVE won the Pulitzer Prize for Fiction in 1990; making Hijuelos the first Hispanic recipient of the award. It was adapted for a major motion picture in 1992 and remains a perennial bestseller. The story's themes of cultural fusion and identity are as relevant today as they were twenty-five years ago, proving Hijuelos's novel to be a genuine and timeless classic.

ABOUT THE AUTHOR:   OSCAR HIJUELOS, the son of Cuban immigrants, was a recipient of the Rome Prize, the Pulitzer Prize, and grants from the National Endowment for the Arts and the Guggenheim Foundation. His seven novels have been translated into twenty-five languages. He lived in New York City and spent part of the year in Durham, North Carolina, where he taught at Duke University. Hijuelos passed away in October 2013.