#THROWBACK THURSDAY! WHEN I WAS PUERTO RICAN BY ESMERALDA SANTIAGO

If you are Puerto Rican, you have probably heard of Esmeralda Santiago.  She is the author that gave Puerto Ricans a face and a voice.  She is every Boricua – torn between two cultures, two languages, two identities.  Which is the real Esmeralda? The answer is another question – why can’t she be both?

Esmeralda’s WHEN I WAS PUERTO RICAN is the first of three memoirs that take readers from the pueblitos of the small Caribbean island to the big city in Manhattan.  Esme’s new life is full of challenges, discoveries and dualities.  In fact, the original version of the novel had two parts – Puerto Rico and America.  Esmeralda is both Puerto Rican and American. There are no sides to choose.  Her journey is ours, and hopefully, we can do it with equal grace and success.

SUMMARY:  In a childhood full of tropical beauty and domestic strife, poverty and tenderness, Esmeralda Santiago learned the proper way to eat a guava, the sound of tree frogs, the taste of morcilla, and the formula for ushering a dead baby's soul to heaven. But when her mother, Mami, a force of nature, takes off to New York with her seven, soon to be eleven children, Esmeralda, the oldest, must learn new rules, a new language, and eventually a new identity. In the first of her three acclaimed memoirs, Esmeralda brilliantly recreates her tremendous journey from the idyllic landscape and tumultuous family life of her earliest years, to translating for her mother at the welfare office, and to high honors at Harvard. 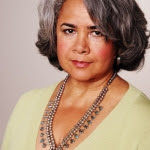 ABOUT THE AUTHOR:  Esmeralda Santiago is a best-selling author, award-winning screenwriter and essayist.  She was born in San Juan, Puerto Rico, and came to the United States at 13, the eldest in a family that would eventually include 11 children.  Esmeralda attended New York City’s Performing Arts High School, then studied part-time at community colleges, until she transferred to Harvard University with a full scholarship.  She is the author of two highly acclaimed memoirs, THE TURKISH LOVER and ALMOST A WOMAN, which was made into a film for PBS's Masterpiece Theatre. She has also written a novel, AMERICA’S DREAM, and has co-edited two anthologies of Latino literature. Esmeralda lives in Westchester County, New York.  Visit her at www.esmeraldasantiago.com.