THROWBACK THURSDAY! THE HEART OF AZTLAN BY RUDOLFO ANAYA

The city usually swallows up the people who move. -- Neighbor

All challenges we face today, and the main and universal themes in Rudolfo A. Anaya’s HEART OF AZTLAN published almost 40 years ago.  The story follows a small family who move from the country to the big city for a better life. All they get is poverty, gang wars, violence, loss of culture, values and family.  But, there is hope at the end and determination to survive, to be stronger and to unite the family -- that’s every family’s dream.

SUMMARY:   The Albuquerque barrio portrayed in this vivid novel of postwar New Mexico is a place where urban and rural, political and religious realities coexist, collide, and combine. The magic realism for which Anaya is well known combines with an emphatic portrayal of the plight of workers dispossessed of their heritage and struggling to survive in an alien culture.

ABOUT THE AUTHOR.   Rudolfo A. Anaya, widely acclaimed as one of the founders of modern Chicano literature, is professor emeritus of English at the University of New Mexico. Anaya was presented with the National Medal of Arts for literature in 2001 and his novel ALBURQUERQUE (the city's original Spanish spelling) won the PEN Center West Award for Fiction. He has also received the Premio Quinto Sol, the national Chicano literary award, the American Book Award from The Before Columbus Foundation, the Mexican Medal of Friendship from the Mexican Consulate, and the Western Literature Association's Distinguished Achievement Award. He is best known for the classic BLESS ME, ULTIMA. 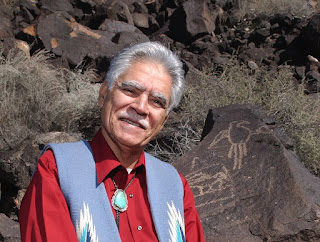 Sadly, Rudolfo Anaya passed away this week, but he will always be remembered as the Godfather of Chicano literature, and one of New Mexico’s literary legends.  RIP.