LATINX HERITAGE MONTH: HISTORY OF LATINX IN THE UNITED STATES

A people without the knowledge of their past history, origin and culture is like a tree without roots. –Marcus Garvey

We’re not taught anything that we contributed to this country and we’ve been around for 500 years. – John Leguizamo

I get my energy and strength from the spirit and words of my ancestors, from my mother’s spirit that shines so bright, and from the unconditional love and support of my father and family. –Yvette Modestin

My great strength is knowing who I am and where I come from, my island. –Oscar de la Renta

Celebrating Latinx Heritage Month by looking at some books on Latinx history in the U.S.  In 2014, for the first time in history the majority of students were non-white. Finally, some educators were able to start teaching history that included the contributions of marginalized peoples.  It’s a start.  It’s a wave. A storm is coming, and we are the storm. 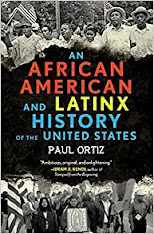 AN AFRICAN AMERICAN AND LATINX HISTORY OF THE UNITED STATES

Incisive and timely, this bottom-up history, told from the interconnected vantage points of Latinx and African Americans, reveals the radically different ways that people of the diaspora have addressed issues still plaguing the United States today, and it offers a way forward in the continued struggle for universal civil rights.

BIO:  Paul Ortiz is a professor of history and the director of the Samuel Proctor Oral History Program at the University of Florida. He is the author of Emancipation Betrayed: The Hidden History of Black Organizing and White Violence from Reconstruction to the Bloody Election of 1920 and coeditor of the oral history Remembering Jim Crow: African Americans Tell About Life in the Segregated South. He lives in Gainesville, Florida. 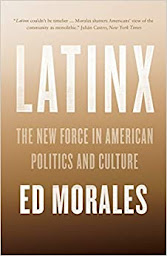 LATINX: THE NEW FORCE IN AMERICAN POLITICS AND CULTURE

In this groundbreaking discussion, Ed Morales explains how Latinx political identities are tied to a long Latin American history of mestizaje—“mixedness” or “hybridity”—and that this border thinking is both a key to understanding bilingual, bicultural Latin cultures and politics and a challenge to America’s infamously black–white racial regime. This searching and long-overdue exploration of the meaning of race in American life reimagines Cornel West’s bestselling Race Matters with a unique Latinx inflection.

Ed Morales is an author, journalist, filmmaker, and poet who teaches at Columbia University. He is the author of The Latin Beat and Living in Spanglish. He has written for the Village Voice, Nation, New York Times, Rolling Stone, and other publications and is a regular commentator on NPR. His film Whose Barrio? premiered at the New York Latino International Film Festival. He lives in New York City. 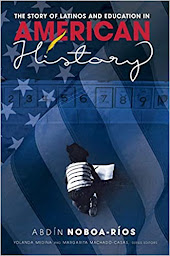 THE STORY OF LATINOS AND EDUCATION IN AMERICAN HISTORY

To understand the history of Latinos in particular, Dr. Noboa-Rios goes back in time to recreate the story. In this book, he relates the dark legacy before and after Plessy, as well as the post-Brown challenges that linger. For a better and more balanced future for the nation, America’s challenge is to ensure that Latino students excel. Understanding how and why this dark history has occurred is imperative to rectify the situation.

BIO:  Abdín Noboa-Ríos, Ph.D., a native of Puerto Rico, is a social scientist and educator who has worked in the fields of education, mental health, and organizational development for decades. As a former practitioner and now researcher from the barrios of Chicago and New York, Dr. Noboa-Ríos has long observed and confronted status quo. Alarmed by how flawed "reform" in education is, disquieted by how poorly conceived "policies" have promoted rather than solved inequity, and concerned about America’s future, he strongly questions where we are going. In response, he bravely calls for a new paradigm―a necessary renaissance―to escape the current chaos and move toward progress.