POETRY: EVERY DAY WE GET MORE ILLEGAL BY JUAN FELIPE HERRERA

EVERY DAY WE GET MORE ILLEGAL

America We Talk About It

....I had to gain, pebble by pebble, seashell by seashell, the

Courage to listen to my self. My true inner self. For that I had to

Push you aside. It was not easy I had pushed aside my mother

Clock. But I did – I could do one thing. I could care. Now we 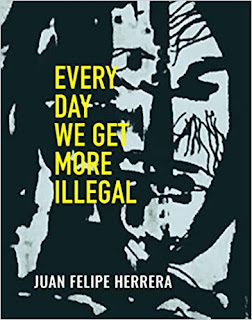 Summary:  In his new collection of poems, EVERY DAY WE GET MORE ILLEGAL, Juan Felipe reports back on his travels through contemporary America. Poems written in the heat of witness, and later, in quiet moments of reflection, coalesce into an urgent, trenchant, and yet hope-filled portrait. The struggle and pain of those pushed to the edges, the shootings and assaults and injustices of our streets, the lethal border game that separates and divides, and then: a shift of register, a leap for peace and a view onto the possibility of unity.

About the Author:   The son of migrant farm workers, Juan Felipe Herrera was educated at UCLA and Stanford University, and he earned his MFA from the University of Iowa Writers’ Workshop. His numerous poetry collections include 187 Reasons Mexicanos Can’t Cross the Border: Undocuments 1971-2007, Half of the World in Light: New and Selected Poems (2008), and Border-Crosser with a Lamborghini Dream (1999). In addition to publishing more than a dozen collections of poetry, Herrera has written short stories, young adult novels, and children’s literature. His most recent works for young people include Imagine (2018) and Jabberwalking (2018). In 2015, Herrera was named Poet Laureate of the United States, for which he launched the project La Casa de Colores, which invites citizens to contribute to an epic poem. Herrera is Professor Emeritus at California State University, Fresno and UC Riverside. He also holds honorary degrees from California State University, Fresno, Skidmore College, and Oregon State University. He served as a Chancellor of the Academy of American Poets from 2011 to 2016.