She had me at Puerto Rico. Ann Dávila Cardinal’s first solo novel is suspenseful and thrilling at the same time. 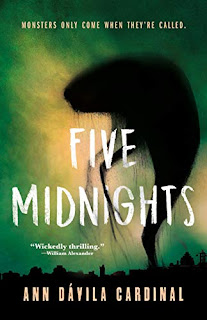 Lupe, a self proclaimed Gringa-Rican, from Vermont visits Puerto Rican to spend the summer with her father’s family, including her police-chief Tio.  Only this summer is different. El Cuco, a childish bogeyman is killing teenagers and Lupe is in the middle of solving the mystery. Seems El Cuco is targeting “los cangrejos” – five estranged friends one of whom is her cousin. Lupe pairs with Javier, one of the cangrejos and a former addict. The spirited duo are in a race against time to stop the Cuco before anyone else dies. 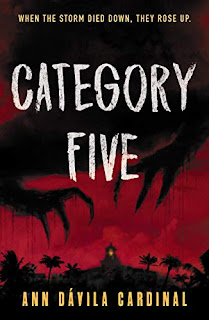 FIVE MIDNIGHTS is an energetic super natural thriller with great glimpses of Puerto Rican barrios. It is an action packed fast page-turner. The author has also created a great cast of interesting diverse characters, which we are happy to report are back in the sequel, CATEGORY FIVE.  This time Lupe, Javier and Marisol are investigating a new series of murders in Vieques after hurricane Maria by monsters they never see coming.

ABOUT THE AUTHOR:  Ann Dávila Cardinal is a novelist and Director of Recruitment for Vermont College of Fine Arts (VCFA). Her co-written novel, SISTER CHICAS, was released from New American Library in 2006. Her first solo release, a horror young adult novel FIVE MIDNIGHTS, was released by Tor Teen in 2019, and the sequel, CATEGORY FIVE, came out this June 2020.  FIVE MIDNIGHTS won an AudioFile Earphones Award, an International Latino Book Award 2020, and was a finalist for a Bram Stoker Award. Her stories have appeared in several anthologies, including Lockdown: Stories of Crime, Terror, and Hope During a Pandemic (2020); and Women Writing the Weird (2012) and she contributed to the Encyclopedia Latina: History, Culture, And Society in the United States edited by Ilan Stavans. Her essays have appeared in American Scholar, Vermont Woman, AARP, and Latina Magazines.  Ann lives in Vermont, needle-felts tiny reading creatures, and prepares for the zombie apocalypse.  Visit her http://annhcardinal.com/.