Courage is the price that Life exacts for granting peace.—Amelia Earhart 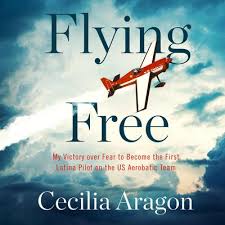 Cecilia Rodriguez Aragon is the daughter of a Chilean father and a Filipina mother. She grew up a shy, timid child often bullied by her white classmates. The teachers ignored her intelligence and tried to steer her away from science. “Girls can’t do science.” Cecilia showed them.

Cecilia may have been painfully shy but she stuck to her guns and earned her PhD in computer science. She worked with astronomers to solve some of the greatest mysteries of the universe; worked with Nobel Prize winners; taught astronauts to fly; worked with NASA designing software for Mars missions; and created musical simulations of the universe with rock stars. Today, she’s semi-retired from flying but holds her dream job – Professor in the College of Engineering at the University of Washington.

It only took her six years to overcome her shyness. FLYING FREE recalls those years. It all began with a terrifying invitation to go flying with a colleague. Cecilia was scared that her one friend at the office would dump her if she didn’t go with him. That flight changed her life forever. Cecilia learned to fly, bought her own plane, taught others, and started competing in aerobatic tournaments – and won! Flying took a toll on her marriage, but they came out on top, and Cecilia went on to become the FIRST Latina pilot on the US Aerobatic Team (think Olympics)!

FLYING FREE highlights her bravery, strength and her tenacity. She never gave up, and that is her message to girls and women of all ages.

Never give up and dream big.
Cecilia Aragon is an author, air-show pilot, and the first Latina full professor in the College of Engineering at the University of Washington in Seattle. She coauthored WRITERS IN THE SECRET GARDEN. Her major awards for research, and a stint at NASA designing software for Mars missions, led President Obama to call her “one of the top scientists and engineers in the country.” FLYING FREE is published by Blackstone Publishing.  Visit her at https://ceciliaaragonauthor.com/.