BOOK OF THE MONTH: THE CIPHER BY ISABELLA MALDONADO 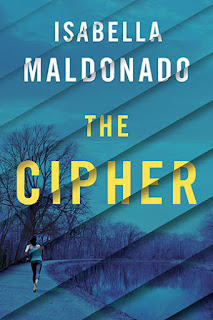 Yes, I read it in one sitting, and yes, I love this "Warrior Girl" Nina Guerrera, who survives a nightmarish childhood, who thrives in the face of adversity, and brings villains to justice. I kept picturing a Latina Dr. Samantha Waters with brown hair, who gets inside the minds of serial killers to solve heinous crimes. The dynamic between Nina and FBI Mind Hunter Jeffrey Wade was brilliantly complicated. Not enemies, but certainly not friends. By the end, they learn to trust one another and have each other’s backs.  We’re hoping for a Book 2. We don’t want to let Nina and Wade go.

Maldonado’s writing is realistic, sharp, precise, graphic, and well detailed. It helps that she is a former Police Captain.  This made the book very intense, very suspenseful, and very addictive. Readers will be on the edge of their seats from the first page to the last. I’m looking forward to the next book in the Nina Guerrera Series due out this August.

SUMMARY: 16-year-old Nina was a homeless runaway when she is kidnapped and tortured by a monster. She manages to escape, but her attacker is never caught. Nina emancipates herself and goes into police work, working her way up to Detective so she can put monsters who prey on children away for life. Now, 11 years later, Nina’s kidnapper is back after a video of her fighting off attackers goes viral. The kidnapper turned killer challenges her and the FBI to find him as he criss crosses the country leaving bodies and ciphers for the police -- and the public! -- to find before he kills again. Thanks to Nina’s memories, the investigative team gets closer and closer to “the Cipher.” However, in saving one life, the Warrior Girl finds herself alone against a killer, and back in her worst nightmare.


ABOUT THE AUTHOR: Award-winning author Isabella Maldonado wore a gun and badge in real life before turning to crime writing. The first Latina to attain the rank of captain in her police department, she retired as the Commander of Special Investigations and Forensics. During more than two decades on the force, her assignments included hostage negotiator, department spokesperson, and precinct commander. Selected to attend the FBI National Academy in Quantico, she uses her law enforcement background to bring a realistic edge to her writing. She lives in the Phoenix area where her uniform now consists of tank tops and yoga pants. Instead of bad guys, she chases around her young son when she’s not handcuffed to her computer. THE CIPHER, the first book in her new series featuring FBI Special Agent Nina Guerrera, was published in November 2020 and the sequel, A DIFFERENT DAWN, will be published in August 2021. Visit Isabella at https://isabellamaldonado.com/