"I had good intentions. But all I did was bring misery to our people.
My days as a king are over. -- King Robin 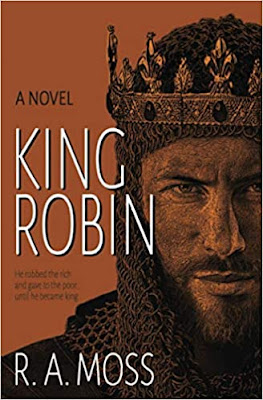 We stayed up all night reading KING ROBIN, and we loved it. It’s a very different telling of the legend & very realistic. We kept picturing Kevin Costner in the role. KING ROBIN is the story after the Happy Ever After. It’s not very pretty, but harsh and deadly. Unfortunately, our hero becomes what he hated most. However, he does redeem himself in the end. Long live the King!

Q: This is a total deviation from your previous writing & you are writing under a pseudonym. Are you worried about cultural appropriation, that a Latino should not be writing about medieval England?
MOSS: Like any difficult decision, there are multiple reasons why I chose a pen name. Under my birth name, I authored four novels in other genres that earned acclaim from Library Journal, Publishers Weekly, and USA Today. But those experiences have shown me that the publishing world sometimes makes assumptions I’d prefer to avoid. Many other authors use pen names and I believe using one for this title gives it the best chance to reach the widest possible audience.

Q: How is medieval England Like Cuba?
MOSS: From 1519 to 1902 when Cuba attained its independence from Spain, Cubans lived in a colonial society not too different from the feudalism of medieval England. A powerful, aristocratic elite ruled over a majority with few rights. That kind of cultural legacy does not disappear quickly. In that respect, Cuba shares a history with much of Latin America.

Q: Was it fun doing research?
MOSS: Absolutely. But my research was driven by my fascination with the unique character of Robin Hood – whose real identity is still a historical mystery, by the way. The novel includes all the true historical figures from the legend: Richard the Lionheart, his brother John and their father Henry II. Most of all, I wanted the story to feel authentic. So I researched the details of everyday life along with the economy and politics of the era.

Q: Maid Marian is very much a warrior in your tale. Thank you. Tell us how you developed her character.
MOSS: Some scholars believe Maid Marian may have been the first feminist character in English literature. Unlike the damsels in distress of many stories from that era, Marian was independent and resourceful. I enjoyed expanding Marian’s character into a skilled archer and clever political ally who is Robin's equal. In KING ROBIN, Marian is also sexually liberated - on her own terms. In fact, my website has a 1 minute video with more surprising facts about Maid Marian’s literary history.

Q: Before we leave, we have to ask, which is your favorite Robin Hood movie?
MOSS: You know, I tried to avoid watching any of the recent adaptations of the Robin Hood legend as I worked on this book over the last three years for fear of being influenced, even subconsciously. Not long ago, after I’d finished the story, I watched Russell Crowe as Robin Hood and was impressed. But it’s hard for me to picture Robin Hood on the silver screen and not think of Errol Flynn. That really puts a date on me, doesn’t it? Speaking of movies, I’m heartened that entertainment attorney Kirk T. Schroder of the Schroder Brooks law firm is already shopping KING ROBIN’s rights as a feature film or online streaming series.

ABOUT THE AUTHOR: R.A. Moss earned his keep as a writer long before penning KING ROBIN, a journey into a new genre which he’s excited to share. Under his birth name, he authored four novels in other genres that earned accolades from Library Journal, Publishers Weekly, and USA Today. Along with being a presenter at book festivals and author conferences in Arkansas, California, Ohio and Wisconsin, his work has been featured nationwide on TV, radio and publications in print and on the web.