I only intended to write the one novel as a romantic comedy spoofing vampire clichés.
-- author Marta Acosta
She may have thought she was going to write one book, but Marta Acosta has written four in her popular—The Casa Dracula Books—series. Marta has even been featured in Latina magazine a couple of times; the latest this January. The Latina Book Club invites you to join us as we chat with Marta about vampires, family, writing and social networking. Read on. 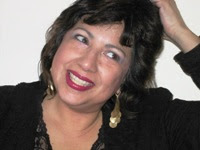 A: I’m a humorist and one of my techniques is to take a theme to its extreme. I think I was watching some sci-fi movie and there were no Latinos. I said, where are the Latinos in outer space? Why don’t we see Latinos in vampire movies? I started the first novel on a whim and the vampires became an analogy for “other” and being outside mainstream culture.


Q: Where did Milagros de los Santos come from? I love her name. Did you always know she was going to be a series?

A: I created Milagro from personality traits I liked from other fictional characters. She’s smart, silly, funny, and cheerful. When people tell me that she feels real and like a friend, I’m really thrilled. I wanted a name that was a little silly and fanciful, so I thought of Milagro.

I only intended to write the one novel as a romantic comedy spoofing vampire clichés. My editor wanted another and another… I was happy to write them and develop the characters and their world, but when she first asked me I thought, heck, what do I do now? After four books, it’s really hard to say goodbye to my favorite fictional chica! 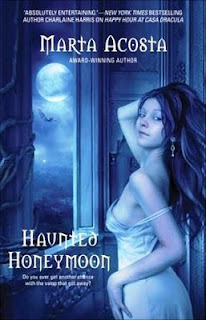 Q: Is this the last book in Milagro’s series? Is this her happy ending?

A: Yes, this is the last book in this part of Milagro’s life. After writing several romantic comedies, I really missed writing more serious fiction – “serious” in mood, I mean, because I take humor very seriously.

Milagro has the happiest of endings and, heaven knows, I made her work for it. I didn’t want her happiness to be easy because most of us struggle to figure out things, including love. She goes through heartache and makes terrible mistakes, but in the end, she knows exactly what – and who – she wants.

I might be tempted to bring her back in the future. Perhaps she and her sexy husband can show up to solve a mystery, flirt, and go to parties.


Q: What is next for Marta? What new books are you working on? will you have anything out this year?

A: My next book is a young adult gothic that Tor Books will publish in January 2012. It seems like a long time off, but there’s so much to do before then! I’m really excited about writing a teen novel. A foster girl, Jane Williams, whose mother was a Mexican immigrant, gets a full scholarship to an exclusive girls’ school. It seems too good to be true. It is. We don’t have a title yet.

I’m also working on an adult gothic, a rather ghostly story that is set in the present and in 1850. I’m really excited about both projects. Humor is starting to creep into them. I can never color within the lines.


Q: Will you be making any appearances that we can mention--at bookstores, book festivals, conferences?

A: I have some family obligations which preclude traveling this year, but I’m always available online. I have a daily blog, Vampire Wire, and I always like hearing from readers and other writers. I may show up at some San Francisco Bay Area events, but it’s not a priority for me. I find I can connect with more people online.

A: I write every day. I’m always trying to cut back on the amount of time I spend blogging, answering emails, updating sites, etc., but I never succeed. I work weekends and holidays, agh!


Q: What do you do when you are not writing? Family? Pets?

Yes, to both! Unlike my heroine Milagro, I live near my relatives and see and talk to them often. I joke that I based Milagro’s cold-hearted mother on my own, but I’m lucky to have a traditionally loving and crazy little Mexican mother.

I have two rescued dogs, Bosco and Betty. They’re very high-energy and I start my days by going to the bayshore park with them. They run off leash and I wander around and admire the vistas.

In my free time, I try to catch up with my friends.


Q: Do you read other vampire/paranormal writers? Which are your favorites?

A: I actually prefer my paranormal stories in film or television and I don’t want to be influenced by other’s paranormal worlds in fiction. I’m a fan of Supernatural, Being Human, and Torchwood.

That said, I do enjoy Caridad Pineiro’s diverse and intelligent vampires in her The Calling series. Caridad breaks the stereotypes with her positive and interesting Latino characters.


Q: Who are your favorite authors? Latina authors?

A: My favorite authors are Jane Austen, Charlotte Bronte, Henry James, Mark Twain… Many of my favorite books were the only novels written by their author: A CONFEDERACY OF DUNCES by John Kennedy Toole, for example.

One of my favorite Latino authors is Mario Vargas Llosa. I love AUNT JULIA AND THE SCRIPTWRITER and I’m reading THE BAD GIRL now.

I do read contemporary romantic comedies by Latina authors, but I’m not going to pick out a favorite!


Q: How do you feel about the e-book explosion going on around us? Do you own an e-reader?

A: Oh, I’m a tactile person so I like paper and ink and books. I see all electronic devices as work. I know people who love their e-readers. I don’t own one and rarely even turn on my cell phone.

A: I have my Vampire Wire blog, which I started to promote my books, and it’s taken on a life of its own. I have an author Twitter that I never update. My Vampire Wire Twitter has news every day.


Q: Does being on these social networks help or hinder you as a writer?

A: Oh, the internet definitely helps me to promote my work and connect with readers and other writers. It’s the best resource an author has. However, it is very time consuming to be on so many sites. I know there’s a way to be more efficient about having an online presence, but I haven’t figured it out yet.


Q: How does it feel to be in Latina magazine? Have you framed the page yet?

A: It was a very pleasant surprise! I’ve been featured in Latina before, but it’s always nice to be included in a national publication.

I’m really happy, though, when my books are mentioned or reviewed by someone who really gets them – and that includes even the small book blogs. The big magazines are great, but I write for all those individual readers.

One of the best compliments my writing ever received was from a teenager who used a few paragraphs from HAPPY HOUR AT CASA DRACULA for her personal online bio. I contacted her and said, gee, this seems really familiar. She wrote back that she was sorry, but that she was Milagro! I said, okay, keep it then.♥

DO COMMENT: Let us know if you like Vampires and if you’ve read any of the Casa Dracula books. 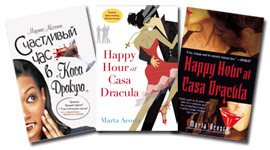 Marta said…
Hi, Maria and Mayra,it's great to come visit this site. I appreciate all the both of you to promote Latina writers. I just linked to this on my Vampire Wire blog.
12:21 PM

Marta said…
Thanks, Teresa! Best of luck with your novels and teaching this year.
3:28 PM

Berta Platas said…
Great interview! Especially enjoyed reading about your favorite tv shows. I've enjoyed being Human from the BBC and can't wait to see what SyFy does with the show. I've always enjoyed vampire books, and have to say yours are among my favorites Marta!
11:37 PM

Marta said…
Hi, Berta, thanks! I tried to watch the US version of the show, but couldn't detach myself from constantly comparing it to the original Being Human.

Hope all is going well with your writing!
2:21 PM

Thelma T. Reyna said…
I still love Marta's first book best. I was so taken aback by the wonderful, down-to-earth, humorous way Milagro was presented. A Latina as a hero in a mainstream novel!! I loved the descriptions of the cottage garden and the garden hen, Edna, her unusual family, and, of course, the hunky Oswald! Good interview, Maria and Marta!
2:23 PM

daniel said…
Yes, I have read all of her books and I am looking forward to picking up the latest addition in the series.
1:16 PM