Juan Gómez-Jurado claims to be an American who was born in Spain. His idol is Steven Spielberg, and his favorite authors include Stephen King, John Grisham and Dan Follet, so is it any wonder that his books are thrillers.

Critics consider Gomez-Jurado an “impossibly young master of [the] thriller.” His first novel, GOD’S SPY, to date has sold in 42 countries and more than 1.5 million copies. His second novel, THE MOSES EXPEDITION – also an international bestseller – won second place in both the Best Popular Fiction and Best Novel Adventure categories of the 2010 International Latino Book Awards. His third novel, THE TRAITOR’S EMBLEM, set in Germany during WWI, will be released in July by Atria Books.

Before turning to fiction, Juan was an award-winning journalist with several Spanish media. He lives in his native Spain with his wife and two kids. Visit him at http://www.juangomezjurado.com/.

We met Juan at BEA last year. He was such a great guy.  Click here for our recollection. 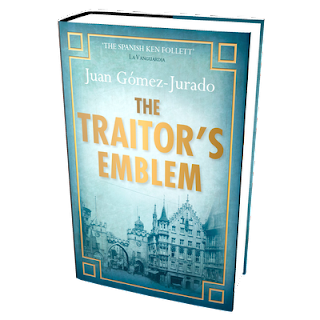