BLOG TOUR: OUT OF THE SHADOWS by Gabriella Hewitt (Plus, Contest!)

August 08, 2011
The Latina Book Club is pleased to be part of the Blog Tour for the writing team of Gabriella Hewitt (aka Sasha Tomaszycki and Patrizia M.J. Hayashi).  Join us as we speak to the authors about their new Shadow Series.  And, don't miss the contest at the end.

OUT OF THE SHADOWS
by Gabriella Hewitt
Samhain Publishing, August 2011 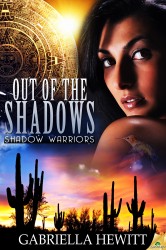 When the last shadow warrior falls, so will all humanity.

BOOK SUMMARY:   With each demon he vanquishes in service to the Aztec sun god, Tomás fulfills his duty to defend humankind—and surrenders another piece of his humanity to his wolf spirit. All hope seems lost until a mission leads him to the door of the one thing he thought he’d never find…his spirit mate –the only woman who can save him from oblivion. When Carolina hears the wolf’s howl, it pierces the very core of her lonely heart. Yet she dare not answer. As the last guardian of her land and the secret it contains, she is haunted by the mistake that cost the lives of her family. Never will she repeat that mistake, especially with a warrior who is more beast than man. Chasing away the demon is easier than breaching the barriers around the heart of the young woman who possesses a strange power over water—and his very soul. But if they are to survive the night, he must convince her they are destined to stand together.


Q: Tell us about your new series, Shadow Warriors. How many books should we expect in this series? Will there be recurring characters?

﻿
﻿ A: It's a series that weaves Aztec mythology with contemporary settings. Where men fight to save humanity from evil and lose a part of the soul in the process. Where women possess gifts from the gods that connect them to the elements and allow them to save the shadow warriors from losing their spirit to their inner beast.

Our tagline is: When the last warrior falls, so will humanity.

There are currently three books written in the series and three more are planned. There is one reoccurring character and that is Huitzilopotchuli, he is the Aztec sun God and leader of the Shadow Warriors.


Q: Let's talk men. In your new series, you have Aztec warriors, shape shifters and other sexy men. Who are they? what are they? what special powers to they have?

A: These men were Aztec warriors in another lifetime. They fought in service of the gods and died for them. On the battlefield the sun god, Huitzilopochtli, tapped the souls of the bravest, strongest warriors to become shadow warriors, fighters who would stand between humanity and the demons sent to destroy it. They carry their own scars and know their days are numbered, yet they continue to fight, working with their inner beast--be it wolf, eagle, jaguar--to protect humanity until their soul is finally devoured.


Q: And we can't leave the women behind. Who are these special women that can hold their own and tame these warriors?

A: Women chosen from birth to protect and guard gods and goddesses that have left the pantheon and hidden themselves on earth. These brave women are marked by the sign of the Huitzil (hummingbird). They are the spirit mates of the Shadow Warriors and are just as fierce and powerful as their male counterparts.


Q: Is this series easier to write with the two of you? Who does what in the writing process?

A: Can't say it's easier or not. We've been partners for so long we can't imagine writing separately. As for who writes, we write back and forth taking the story forward, moving back, writing over one another until are voices are so blended that you cannot tell who wrote one sentence or another.

[From LBC:  To read more about how these two ladies write "together" while one lives in Japan and the other in the U.S., click here. ]


Q: You also have an ICE series. When can we expect new books in that series?

A: THE ICE FILES is a series set in paradise. They are stories filled with passion and suspense. Dark Waters is the first story and we are set to begin working on the sequel in October. We have two other stories ahead of it to finish and then we go back to Puerto Rico to track down mastermind intent on breaking the law and breaking hearts.

For more on the authors, please visit them at http://www.gabriellahewitt.com/.

DO LEAVE A COMMENT.  Let us know how you feel about shape shifters, Aztec warriors and the women who can tame the savage beasts within them.


CONTEST:   Follow Gabriella Hewitt and the tzitzimime (celestial demon and nemesis of Shadow Warriors; see picture above) on their blog tour and leave a comment to be entered to win a $25 gift certificate from Samhain Publishing. It’s that easy!  All entries must be in by August 24th. The winner will be declared on August 26th on the Gabriella Hewitt blog. One winner will be chosen at random for the prize.  Visit http://www.gabriellahewitt.com/ for more information.

YACWW said…
Thank you so much for the interview. It is always so nice to stop over here:)

Stevie Carroll said…
I'm not always the greatest fan of shapeshifters but the mythology behind this series intrigues me.

And congratulations on being awarded book of the month in July.
2:33 AM