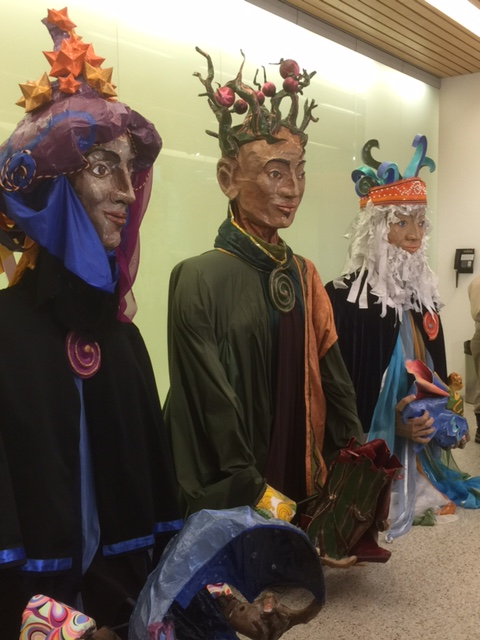 Joseph and Mary bundled up the baby Jesus, while the three magi gulped hot cups of coffee.  The *Honorary Kings, Madrinas and Padrinos lined up outside the Museum, school graders from the neighborhood gathered with their homemade crowns, while sponsors and radio stations jockeyed for position.  Even Aurora Anaya-Cerda, founder of La Casa Azul Bookstore, and La Muerte, ruler of the Land of the Remembered, from the +movie "Book of Life" joined the fiesta.

Outside, dozens of men, women and children of all ages gathered on 104th Street and on Third Avenue to watch the parade in all its white glory.  Also, present were members of Las Comadres Para Las Americas (a networking group for Latina women of which I am proud to be a member).  There was a nice "lady" camel but the real ones were pulled at the last moment because of the slippery roads.

Regardless, a great time was had by all.  There were crowns, smiles, laughter and much brotherly/sisterly love.  Afterwards, my Comadres and I retired to La Fonda for a scrumptious lunch.  Can't wait for next year!


About El Museo del Barrio:  It is New York's leading Latino cultural institution.  El Museo welcomes visitors of all backgrounds to discover the artistic landscape of Latino, Caribbean and Latin American cultures.  It has a wide-range of collections and critically acclaimed exhibitions, complemented by film, literary, visual and performing arts series, cultural celebrations and education programs.  This is El Museo's 38th Annual Three Kings Day Parade.  Visit them at www.elmuseo.org.

+"The Book of Life" movie releases on January 27 in digital and BlueRay.