EXCERPT: HIS-PANIC: EXIT TO BOOGIE DOWN BY EDDIE CISNEROS

The Latina Book Club congratulates author Eddie Cisneros
on the second book is his HIS-PANIC trilogy.
We are happy to share an excerpt with our readers. 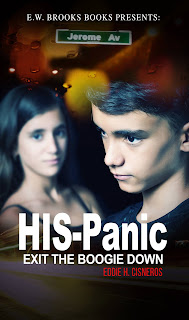 HIS-PANIC: Exit to Boogie Down
By Eddie Cisneros

"I sluggishly walked around the neighborhood. The last few days had been disheartening to say the least. I was starting to second guess whether or not this whole drug life I'd become a part of was really something worthwhile anymore. There were mixed emotions running through my head. I felt lost and confused. That simple infatuation of selling drugs and making money had turned against me, betraying me. More so, was the fact that I now had a great deal of trust issues swirling. I remember talking with Taz while hanging out at Jerome Park one night. I was able to open up about a lot of things, about my argument with Duckie and the whole situation with Rosemary and her brother. I explained to him that I really thought my life had no meaning. That I felt like I was lost at that particular time in life and had to find myself, find something that would validate who I could really become. Taz was kind of hurt. He felt the group was finally breaking off. I agreed with him. I told him that all shows must eventually come to an end. It was a tender moment that we shared that night in the park. In the end, we did both agree that no matter what, we would always be friends. Taz also agreed to let me stay with him. I told him I would need a week, after that, I was gone."

SUMMARY:  In 1991, Jerome Avenue in the Bronx belonged to Antonio Pintero and his Foo Crew. They were the talk of the neighborhood, going from peddling nickel and dime bags to pushing drugs and money across town in packaged book bags.
Antonio was only 15.
But some things in life are often short lived.
Antonio slowly begins to unravel. He begins to feel the pressure of the drug game, especially his step-father’s sudden shady disappearance, cops in hot pursuit and possible trust issues amongst his own group. With nothing left, Antonio wants out. His word has spiraled out of control and the only answer is to ultimately…
HIS-Time…
HIS-Life…
HIS-Story…
HIS-PANIC.

Click here for our interview with Eddie last year.  His book, HIS-PANIC, was The Latina Book Club’s June 2015 Book of the Month.

ABOUT THE AUTHOR:  Employed as a doorman for over twenty one years, Edward Cisneros “Eddie C.” has been quoted as saying, “I am not a doorman who chooses to write, but a writer who happens to be a doorman.” Apart from his novel series, HIS-PANIC, Eddie has two finished screenplays under his belt. A stylized thriller titled BEND about New York City homicide detectives on the trial of a serial killer and its sequel. He also served as contributing writer for a real estate website with bi-weekly posts entitled, “A Doorman Speaks.” Eddie has resided in Queens, New York, for much of his life, and it is where he continues to live with his family. He is currently setting up a website, but he can be found on Twitter @eddiecauthor; readers can connect by searching @EddieCauthor  (Eddie C Author). And, he can be found on Amazon as well.