THE COLLECTED POEMS OF OCTAVIO PAZ (New Directions) is a landmark bilingual gathering of all the poetry he has published in book form since 1952, the year of his premier long poem, Sunstone (Piedra de Sol)―here translated anew by Eliot Weinberger―made its appearance. Here’s an excerpt:

a sudden presence like a burst of song,
like the wind singing in a burning building,
a glance that holds the world and all
its seas and mountains dangling in the air,
body of light filtered through an agate,
thighs of light, belly of light, the bays,
the solar rock, cloud-colored body,
color of a brisk and leaping day,
the hour sparkles and has a body,
the world is visible through your body,
transparent through your transparency.
--Sunstone, Octavio Paz 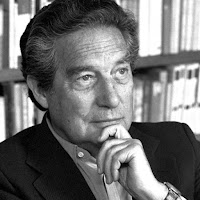 ABOUT THE AUTHOR:   Octavio Paz (1914-1998) was born in Mexico City. He wrote many volumes of poetry, as well as a prolific body of remarkable works of nonfiction on subjects as varied as poetics, literary and art criticism, politics, culture, and Mexican history. He was awarded the Jerusalem Prize in 1977, the Cervantes Prize in 1981, and the Neustadt Prize in 1982. He received the German Peace Prize for his political work, and finally, the Nobel Prize for Literature in 1990.