BOOK REVIEW: LADY Q: THE RISE AND FALL OF A LATIN QUEEN 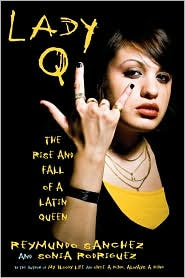 LADY Q: THE RISE AND FALL OF A LATIN QUEEN
By Reymundo Sanchez and Sonia Rodriguez
Chicago Review Press
July 2008

The closest I have ever gotten to a gang was reading DOWN THESE MEAN STREETS by Piri Thomas. Though I am a New York Rican, I thank God and my mother that my sisters and I never had to deal with abuse, violence, drugs or gang warfare. We were very lucky. Lady Q was not.

LADY Q is a haunting and disturbing book. It is too vivid, too violent…too real. When most people think about gangs, they think boys, men. They never think about female gang members, but there are plenty.

Sonia Rodriguez – her real name has been changed to protect her, her children and grandbabies – grew up unloved and abused. Drugs, violence and gangs were the norm in her house. The frequent police raids at home seemed like a game to her as a child. Sonia looked for love and support from her mother and family; not finding it, she “crashed onto the streets and into gangs” in Chicago.

Sonia was abused and raped as a child, abandoned by her family and gang, shot at, used as a drug mule and thrown in jail, but she survived and returned to become one of the most ruthless and powerful Latin Queen leaders ever.

Now in her 40s, Sonia has gotten away from Chicago and the ‘hood. She is working hard at rebuilding her life and re-establish communication with her daughter and grandchildren, while raising her son, whom she prays will never follow in his mother’s footsteps.

ABOUT THE AUTHOR: Reymundo Sanchez – not his real name – is an ex-Latin King himself. His first book was his own memoir, MY BLOODY LIFE.

COMMENTS
Has anyone else read this book? What did you think? Leave a comment here. ---mcf

Mayra Calvani said…
Wow, this sounds like a disturbing, compelling book. Thanks for sharing your thoughts on it, Maria.
2:52 AM