Ana Castillo’s debut novel, THE MIXQUIAHUALA LETTERS, was “groundbreaking” and largely misunderstood. Mainly because the book was not a novel per se, instead the 138-page book is a collection of letters from Teresa to her friend Alicia, an artist.

Readers are cautioned at the beginning of the book that they have three options on how to move forward – “for the conformist, the cynic and the quixotic.”  Depending on which option the reader takes that would determine his journey and satisfaction at the end.

The letters are only from Teresa’s point of view, but they contain enough substance to flesh out both women, and to highlight their adventures.  Confronted with strict societal roles and rules of conduct, Teresa and Alicia rebel. They leave their husbands, travel to Mexico by themselves and proceed to drink, smoke, and sleep around.  They act like men, and that can be very threatening.  Teresa and Alicia are not conformists; they may be a little quixotic; and, they are definitely cynical.  And by the end of the correspondence, readers are left with two defiant women boldly proclaiming their independence.

SUMMARY:  This epistolary novel was written as a tribute to Julio Cortázar’s HOPSCOTCH, and examines Latina forms of love, gender conflict, and female friendship. This groundbreaking debut novel received an American Book Award from the Before Columbus Foundation and is widely studied as a feminist text on the nature of self-conflict. 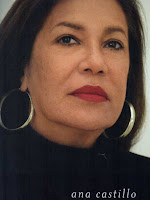 ABOUT THE AUTHOR:  Ana Castillo writes novels, poetry, children’s books and short stories. She is the recipient of numerous awards, including the American Book Award, a Carl Sandburg Award, a Mountains and Plains Booksellers Award, and two fellowships from the National Endowment for the Arts. Ana is the editor of the anthology Goddess of the Americas: Writings on the Virgin of Guadalupe, available from Vintage Espanol (La diosa de las Americas).  Visit her at www.anacastillo.net.