The Latina Book Club reserves Fridays for Book Covers.
YES, we do judge books by their cover. Covers are so much fun, and often give clues as to what the book is truly about.
Today we are looking at the book covers from Lee E. Cart’s The Mayan Chronicles. 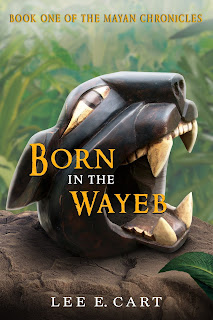 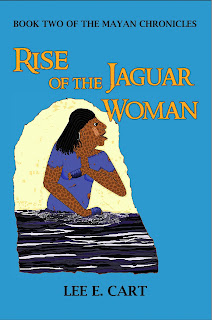 Clearly the author is experimenting with covers given the radically different styles. One is a very sharply focused photograph, the second a colorful drawing. We prefer the photo on Book 1, because it’s a crisp image that grabs the attention, especially with those sharp teeth.

Cover 1 (BORN IN THE WAYEB) says jungle, mystery, ruthlessness, ancient prophecies, and shouts danger. We’re getting images of that old Mel Gibson movie, Apocalypto, and the foreign film Embrace of the Serpent. Our hero is in for dark and perilous times.

Cover 2 (RISE OF THE JAGUAR WOMAN) is more of an amateurish cover, but it conveys an image of female power in tune with the elements, with nature. We love that she is a Jaguar woman. Maybe a Priestess or a Warrior? She’s near water and seems to be underground so the same dark magic as Book 1 with an added sacrifice or two.

How close were we?

BORN IN THE WAYEB is set deep in the Mayan jungle, where a young girl Na’om is born on the day of the Wayeb (evil god). Fearing her taint, the villagers vanish her into the jungle. She grows up an outcast with a pet jaguar. She has dreams and visions she doesn’t understand, and which make her an instant rival of the black witch of Mayapán. Na’om visions soon become living nightmares, and she must come into her powers before evil destroys the few she loves and the village.

In RISE OF THE JAGUAR WOMAN, Na’om and the black witch of Mayapán, Satal, square off again. Satal plots revenge, while Na’om and her black Jaguar, Ek’ Balam, are plunged into the Underworld where they face trials concocted by Satal’s evil gods.


ABOUT THE AUTHOR: Lee E. Cart is an award-winning author. Both of the books in her Mayan Chronicles have won International Latino Book Awards.  Lee is a freelance writer, editor and book reviewer for Kirkus Reviews. She writes young adult fiction, children’s books, poetry, and creative non-fiction essays. Lee also does Spanish translation work. A woman of many talents, Lee is hard at work on Book 3 of her Mayan Chronicles trilogy. Visit her at www.leeecart.com.

PS: Email us your book covers if you would like to be featured on our Book Cover Fridays at latinabookclub@aol.com. Happy Reading.

Maria Ferrer is the founder of The Latina Book Club. She is an avid reader and hopeful writer, who enjoys promoting and supporting Latino writers of all genres. Her mantra: Read Latino Lit.