REVIEW: A BRIEF GUIDE TO TAOS: WHERE TO EAT, SHOP, WORK OUT ...AND MORE by Teresa Dovalpage 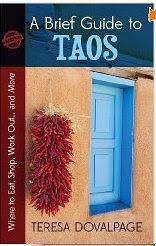 Panza Llena, Corazon contento.
Full Belly, Happy Heart.
---A Mexican Saying
Located in the shadow of the Sangre de Cristo Mountains and Wheeler Peak, Taos, New Mexico, is a “mix of Native American, Spanish, Anglo, mystical, artistic and hippie ingredients.”  The Taos Pueblo was built between 1000-1450 A.D. and chosen as an UNESCO World Heritage Site in 1992.  It is still a vibrant and energetic city full of color, flavors and peoples.
A BRIEF GUIDE TO TAOS is Teresa Dovalpage’s first ebook.  It is a collection of articles she wrote for The Taos News, and contains reviews of local businesses.
Teresa takes the reader on a stroll down the Historic District's Ledoux Street, and points out the best places to eat Mexican (Orlando’s), American (5 Star Burgers), European (Casa Continental) and “New Mexican” (La Cueva) cuisines.
And you can forget that other fancy coffee, in Taos you want an affogato from Elevation – it’s a scoop of gelato topped with a shot of hot espresso – which won 1st place in the 2013 People Choice Awards for Best Cuppa Joe and 2nd place for reliable Wi-Fi.

If you are a pet lover, try Coffee Cat’s, where they serve you “rocktails” with your tea.  Yes, you get rocks in your tea.  All the teas are named after dogs; all the coffees are named after cats.  Best drinks – the Phat Cat and Fido.
Teresa also lists the best places to shop for outdoor gear (Mudd-N-Flood), for leather boots (Atira’s Southwest), for beads (Thunder Lizard) and for Native American crafts and pottery (Jackie’s Trading Post).
If you are looking to heal the body and soul, try visiting 8th generation curandera Patricia Padilla, who heals with love and compassion.  There is also A Better You, skin care clinic, and the Women’s Health Institute. 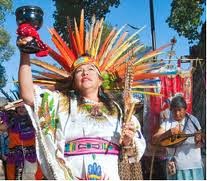 Included in the ebook are bios on local chefs and artists, like 19-year old chef Richard Pyatt at Eske’s Beer Pub and Eatery, who is a ski champion and makes a great duck confit; and watercolor artist Leandro Martin Rodriguez, proprietor of Acuarelas Studio and Gallery.  He runs the gallery single-handedly and has his own fashion label in California, Leandro Designs.
The ebook also includes recipes for savory dishes, including gluten free ones like green chile and cheddar corn bread stuffing.  And, there are recipes for facial scrubs too.
A BRIEF GUIDE TO TAOS is a potpourri of restaurants, galleries, shops, gyms, skin care centers, etc.  It’s a quick read, informative and a very in-depth look at the best of Taos from a local.  This is a must-have ebook for tourists and new residents alike.###
ABOUT THE AUTHOR:    Teresa Dovalpage was born in Havana, Cuba, and now lives in Taos, New Mexico.  A bilingual author, she has published six novels, four in Spanish and two in English, two collections of short stories in Spanish and one in English.  She has a PhD in Spanish Literature, and currently teaches at UNM-Taos and has two weekly columns in The Taos News.  To learn more about this prolific author, visit her at http://teresadovalpage.com/  (Spanish) or at http://teredovalpage.com/ (English).

Unknown said…
It’s really informative post. I like the way you describe this. Thanks for sharing. . .
professional packers and movers bhilai.
1:33 AM